Charles Crawford is the author of Speeches for Leaders, a lively but merciless look at public speaking technique observed from all possible angles: 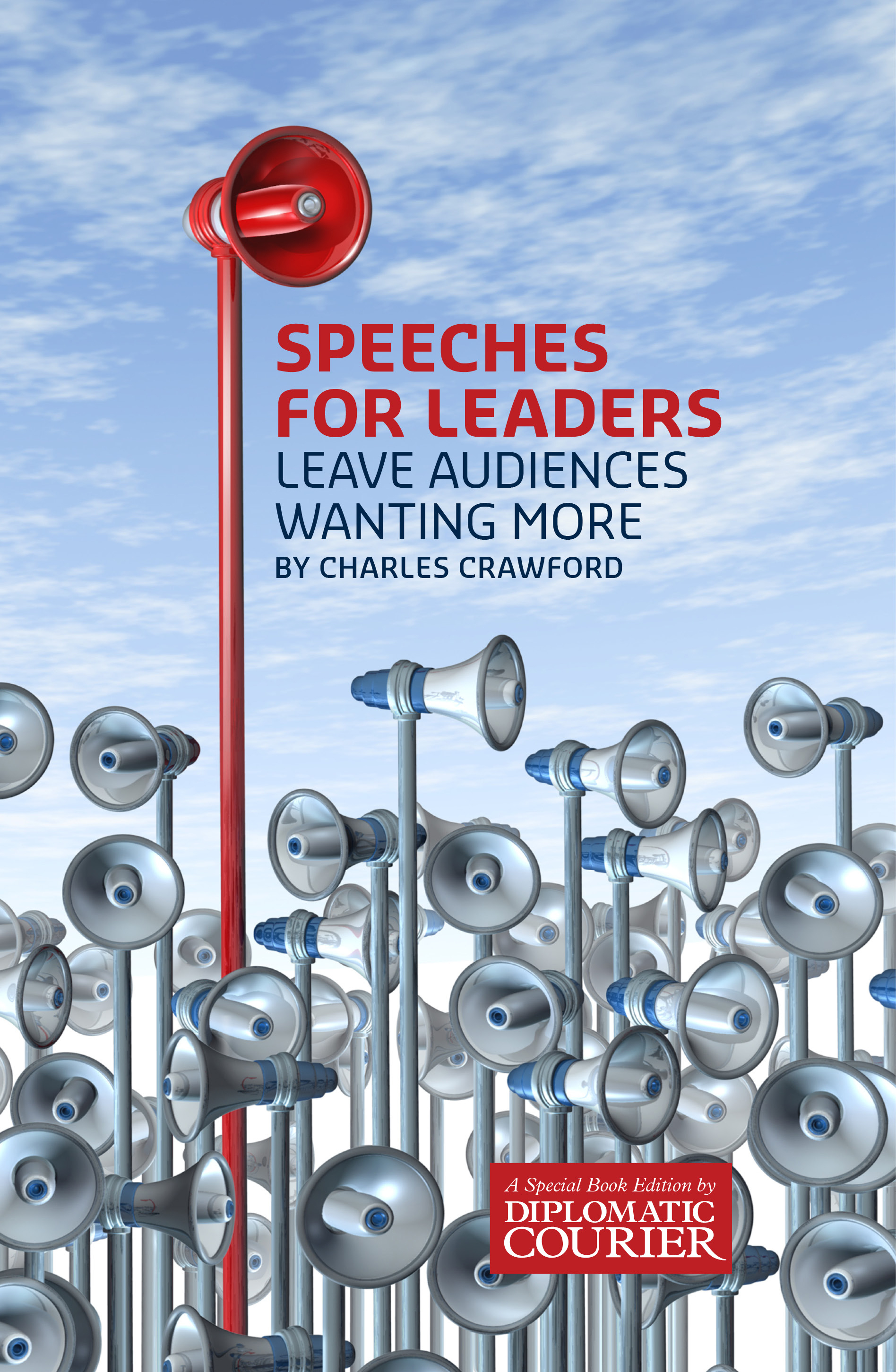 It is available in North America via Amazon.

If you live elsewhere on Earth and want a signed hard copy or a bulk order, please contact the author directly: mail@charlescrawford.biz. Payment via cash, cheque or PayPal.

From 1985-87 Charles Crawford served as the official FCO Speechwriter under Foreign Secretary Sir Geoffrey Howe. He has contributed ideas and language then and subsequently for speeches by the Foreign Secretary, members of the Royal Family, successive Prime Ministers as well as different Ministers and others in public life

In 1987 he wrote the FCO’s first-ever Guide to Speech-Writing. Two decades after its first version this Guide remains the FCO’s core in-house speech-drafting training tool

As well as drafting many official speeches, articles and interventions over his FCO career, Charles Crawford produced a large body of vivid official telegrams and emails, usually in an unconventional direct style. His work – some of it controversial within official circles – was read and praised at the highest levels in London and in NATO and the European Union:

just about the best scenesetter [No10 staff] have ever seen

one of the few truly original thinkers in my time [in the FCO] – at his best on pungent analysis and stylish, warm-hearted influencing

acrobatic and eye-catching in his use of language

After leaving the FCO in 2007 he has supported speeches by Radek Sikorski when he was Poland’s Foreign Minister. His speech drafted for former MI6 Chief Sir John Sawers on the broad themes of Technology, Security, Freedom won a 2016 Cicero Award in the USA under the Public Policy heading.

Charles Crawford also has delivered scores of speeches and presentations (including extended passages in Serbian or Polish) in the United Kingdom and abroad  He has a wealth of experience in the public speaking techniques needed for formal gatherings at the highest state level, Parliamentary debates, major commercial policy speeches at home and abroad, after-dinner remarks and set-piece contributions at seminars and business meetings.

Charles Crawford now offers a lively and speedy (and discreet) expert speech-writing and text-drafting and PowerPoint presentation consultancy service for professional people who may lack the time or expertise or confidence to make a strong, memorable speech or presentation. He also can help with speeches at weddings. Or funerals. And with presentations or interviews for job applications

Examples of his own speeches on various foreign policy themes include:

Bosnians, Europeans (to an audience of Bosniac intellectuals in Sarajevo in 1998, many critical of UK policy)

The Frontiers of Diplomacy (to an invited audience of Serbian opinion-formers in 2003, after the assassination of Serbian Prime minister Zoran Djindjic)

For a formal but lighter speech (partly delivered in Polish) here is his speech to 1400 guests at the British Embassy’s annual reception in honour of The Official Birthday of HM The Queen, delivered in Warsaw in June 2007

Charles Crawford has given many masterclasses in public speaking and presentation skills to private and public sector clients, including the United Nations in Geneva:

The workshop you facilitated was truly exceptional. The drastic improvement one could observe from one day to another was more than convincing. It was definitely one of the highlights during my 5 years in staff development

Charles Crawford is pleased to consider invitations to speaking engagements, and to discuss speechwriting and other presentation skills support including private coaching