Once I send a witty telegram to the FCO from Sarajevo entitled:

Bosnia: The Plot Thickens – And The Thicks Plot

The deep problem in Bosnia is that the place is rotten with feckless Yugoslav communist self-management philosophy.

The idea that you can talk and talk about ‘politics’ and borrow money from the West without paying it back.

Bosnia and Herzegovina as one of the former Tito Yugoslavia’s six republics was a special beneficiary of self-management. Funds poured in to what was one of the most undeveloped parts of Europe to build arms factories and other heavy industry. The Titoists had the idea that these installations would be better protected by partisan warfare against invading Americans/Russians in the Bosnian mountains than on the plains of Vojvodina.

Which was no doubt correct. But it helped create a sense across Bosnia that it needed to do nothing but live off other republics, themselves supported by unwise Western loans intended to keep ‘non-aligned’ Yugoslavia out of the Soviet orbit.

Moscow: sell us cheap weapons – or we’ll have to turn West!

West: give us cheap loans – or we’ll have to turn East!

It worked a treat. Until Yugoslavia went bust as the Cold War ended.

The greatest metaphor for Bosnian official cluelessness for me was the Sarajevo Holiday Inn.

This architectural calamity in bright yellow and dull purple and the world’s naffest sofas was built for the Sarajevo Olympics in 1984, when I was the UK team’s Olympic Attache: 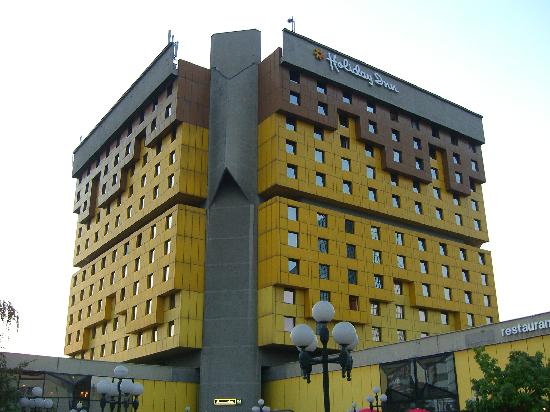 It took serious damage during the siege of Sarajevo. Once the war ended, it was rebuilt.

But no obvious effort was made to modernise it. It was restored to its pre-war state at significant expense, including the hopeless check-out system. It was as if the Bosnian leadership(s) wanted simply to turn the clock back, not take stock of a transformed world and try to find out how best to create new wealth in it.

Because of the war and its own parochial self-absorbed political culture, when the Cold War ended Bosnia never had any popular movement for liberal reform. Instead it had ruinous gangster-ethnic feuding.

Now, many years later, things are still stuck. As Ian Bancroft well describes in the Guardian:

As the British electorate prepares to go to the polls, Bosnia and Herzegovina’s own elongated pre-election period enters a more frenetic phase. Amid talk of referendums and rivalries, however, the key issue of economic reform remains sidelined.

The economy contracted by some 3.5% in 2009, and with unemployment currently hovering at around 40%, this should be the single most important issue for Bosnia’s electorate. Nevertheless, as in previous years, election campaigns will be fought not on the basis of who can deliver change, but on who can best protect "vital national interests".

His piece links to this unerring wisdom:

The Bosniac elite in Sarajevo with intermittent support from some in the ‘international community’ want BH-wide government harmonisation and the constitutional changes they think must occur for that to work.

Yet the fastest way to harmonise the space across Bosnia would be for the larger Federation entity to become super efficient and economically booming with Serbs welcomed into a good share of top positions, so that Serbs clamour to leave Republika Srpska and live there. Instead the Federation is inefficient, wasteful and over-governed, to the point of near-bankruptcy.

In these circumstances (and ignoring for now their own nationalistic cynicism), the Bosnian Serbs not unreasonably fear that Sarajevo’s demands for ‘harmonisation’ are all about extending to Republika Srpska negative forms of majority/Bosniak control (including ethnic discrimination) rather than any real desire to make the country as a whole ‘work better’.

In other words, the absence of ‘harmonisation’ ought to be inducing tax and overall efficiency competition between the two Entities to attract people and investment. And it is. But Republika Srpska is on the whole winning that competition, and sees no reason to surrender its edge.

The thicks are still plotting.