Public Speaking: Listen to Aunt May!

On 20 Mar, 2015 By Charles Crawford   |  Category – General Interest / Mass Media and the Internet / Masterclasses, Coaching and Teaching / Public Speaking and Speechwriting / The Art of Diplomacy / Writing and Language

This afternoon I finished my first online course for the United Nations on the general theme of drafting talking-points and speechwriting.

Running any course through successive webinars poses interesting new challenges. Above all, how to get the participants to do something useful between sessions and during the sessions. In this case, we hit upon an interesting new formula. Namely that participants were asked to draft short speeches for each other and then deliver these speeches in video form for everyone to watch subsequently.

We managed to organise the sessions so that on one side of the screen you could see the video of the speaker giving the speech, while on the other side you could see the text the speaker had used. This has the great advantage of showing in an unusually persuasive way how the format/style of the words laid out on the page influences the speaker trying to deliver them.

Despite the artificiality of giving a speech into a WebCam rather than to live audience, the exercise threw up all sorts of sharp points of technique. Such as dispensing with the usual few sentences of introductory platitudes, in favour of starting straight into the substance with an arresting idea or story.

It also showed how the participants had grow in confidence over the five sessions and were now far readier to experiment with dynamic writing ideas. Most satisfactory!

For me the most striking feature of today’s final webinar were seeing what a difference it made using short sentences. Look at this example. It is a typical UN speech sentence: 44 words long, earnest, heavy, complicated, tedious. Exactly the sort of thing no one wants to listen to. Thus:

By delivering essential services such as health, education and good governance, as well as facilitating the spread of critical information in the areas of climate change and disaster risk reduction, ICTs have helped us to make real progress in achieving our sustainable development goals.

How to breathe some life into this ghastly text? Simple. Make the sentences short and direct:

In short, ICTs promote sustainable development. They help us hit our targets.

This passage is only 32 words. Yet is says so much more to an audience.

Plus, of course, if a speech is laid out like this on the page the speaker can immediately see what’s going on and has scope for improvising. In other words it does not follow that if the speechwriter uses very short sentences even down to one-word sentences, the speaker in fact will deliver them in that staccato fashion. The speaker has options for playing with timing, emphasis and tone of voice that simply aren’t there with long, ugly sentences.

We used this example too:

Or to put this another way, a green economy model needs to be able to demonstrate to policy makers that there are real economic benefits to be accrued from good management of ecosystem services; and the model must help decision-makers make informed choices about where investments should be directed, which industries should be established and how livelihoods can be secured in order to improve the management of natural resources as a fundamental economic asset

I cannot lie to you. Out there in the International  Community real life people are drafting speeches with hideous, sprawling monster-sentences like this in them. And audiences are dutifully turning up to listen to them in sheer misery.

What can we do with this one? How about turning it into English as spoken by human beings? Thus:

I’ll put it another way. What do policy makers need to see?

If it makes sense, we can use it to take decisions

Which new investments? Which industries to encourage? How to secure livelihoods?

How to manage our most precious asset?  Our natural resources

It’s hard to believe that this version is saying everything the first version says, if not more. One problem with being direct is that people in fact understand what you’re saying, And perhaps challenge some of the assumptions you’re making. Maybe this is one reason why there appears to be some sort of international bureaucratic default towards complete obscurantism that assembles texts through largely interchangeable Lego-blocks of useless jargon:

Someone today actually used the expression “a globalised world”. I mercilessly did not refrain from asking what an unglobalised world would look like.

Set about drafting a speech using the sort of language you would use when explaining an issue to your intelligent aunt. Imagine her sitting there listening to you and raising an eyebrow of amused withering derision every time you say something stupid. Work out what it is that doesn’t work, then strike that out of your draft.

Aunt May likes to understand what you’re saying. She is keen to learn. She may not know much about the technical issues. But she does know when cleverness slumps into pretentious twaddle.

Speech writers! Anyone preparing to give a speech or interested in public speaking! Keep it simple.

And above all, always let Aunt May be your guide 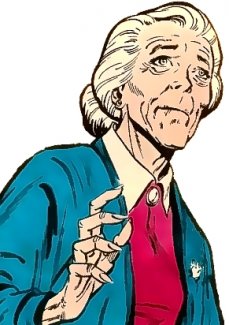