Who Wins the Future?

As Mark Steyn (and others) have noted, the future belongs to those who show up. For the next century or so, those people largely fall into two categories. Africans and Indians. With added Arabs.

The UN’s Population Division churns out all sorts of numbers about global demographic trends. They used to have a superb graph that allowed you to compare individual countries over a 1950-2100 span. That has vanished – a bit too, ahem, vivid? Instead their latest projections are done country-by-country, with lots of other supporting detail.

Still, by cutting and pasting we pedants can look at what is going on as between different countries. Before that, here’s what I wrote on this in 2012:

Back in 1985 or so I wrote a speech for Sir Geoffrey Howe about demographic trends. It posed this question:

Take a country with a fast-growing population. It gets worried that its people may outstrip its resources and passes a law that limits families to a maximum of two children. The law is 100% obeyed from the day it is passed. When does the country’s population stop growing?

The answer, of course, is that in the absence of wars or massive calamity the population stops growing roughly around the time that the children who are born the day the law is passed themselves die of old age. In other words, the population growth juggernaut trundles on for some 70 years before the decline sets in.

A population grows each year because more people are being born than die. So if there are more many young people than old people, it has to keep growing until the current young people themselves reach the top of the demographic pyramid. As in Yemen and Tanzania now.

This effect also works in reverse – Ukraine and Russia are set to see accelerating demographic decline over this period as there are today too many old people dying and not enough new young people appearing.

What this means is that a country with a wide-based pyramid of population by age has a lot of children and not many oldies. So it’s population will be growing: more people are being born than die!

This has some not always intuitive results. Thus it is possible for a country’s fertility rate to be declining while the population carries on growing for decades. Why? Because if there are lots more youngsters than oldies, even if the those youngsters have smaller families there are still in absolute terms lots of youngsters having families who in turn have families. In other words, a population stops growing and may even start shrinking only when the pyramid becomes a rectangle, as the width of the top matches the width of the base.

Also, it’s not enough to say that poverty causes rapid population growth and growing prosperity helps slow it down. If a poor country with a fast-growing population suddenly gets international aid and better infant medical care, this new ‘wealth’ may create a population jump: suddenly far more children live to child-bearing age than previously, while attitudes to bigger families take a generation or two to adjust. This creates a significant population ripple echoing down the generations. See Kosovo.

It’s scarcely an exaggeration to say that Serbs have given up and are trending towards extinction. Serbia’s population peaked around 1980 after the disaster of WW2 but then started heading downwards. By 2100 on the ‘median’ UN predictions, Serbia will be below 6 million people.  Here are Serbia’s graphs. As you can see, Serbia around 2100 will have a smaller pyramid base than peak – far more oldies than youngsters, hence the grim combination of both a declining and ageing/weak population. The worst position to be in. Croatia and Bosnia are scarcely better. 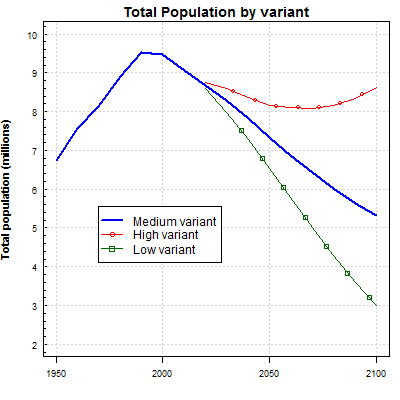 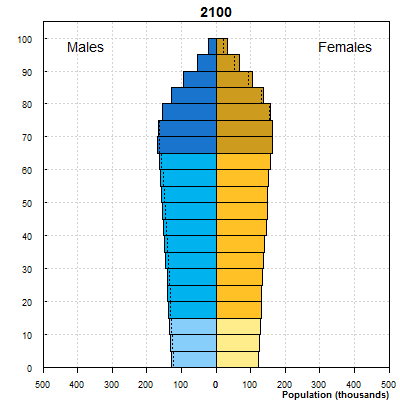 Poland has bigger absolute numbers and a handy demographic ‘ripple’ following the Solidarity martial law period when people were kept inside with little to do. But by 2100 it too will be at numbers comparable with the 1950s(!) and an ageing population. Here’s its big-picture trends: 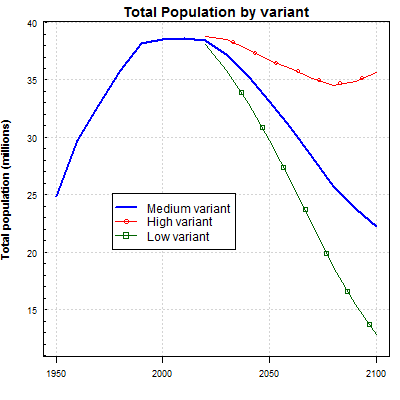 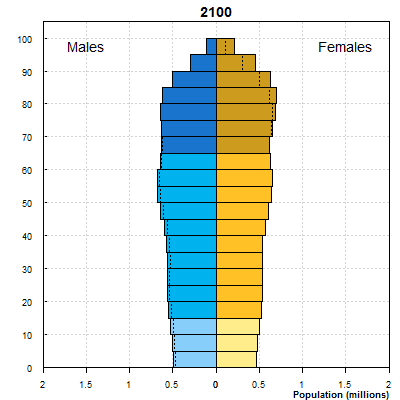 Russia of course is a much bigger country. Yet the shape of the graphs and pyramid resembles Poland and Serbia and shows at best population stagnation. Note how men die much earlier in Russia than in Serbia/Poland, hence far fewer men in their 80s/90s: 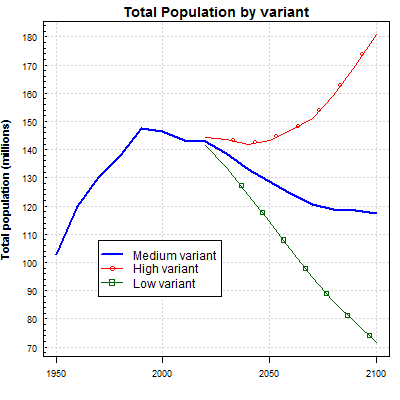 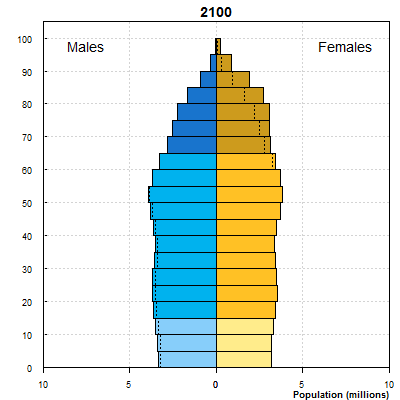 So much for demographically challenged Slavs. What about the Chinese?

China is now the world’s largest country. But by 2100 it will be well behind India in demographic terms, as its population too starts to fall as a result of the one-child policy brought in by the communists. The absolute number of Chinese people of child-bearing age grows then declines, so fewer children are born. China in 2100 will have a smaller ‘pyramid’ base than peak: an old (and weak?) society? 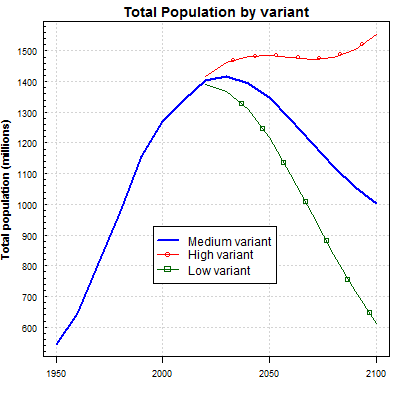 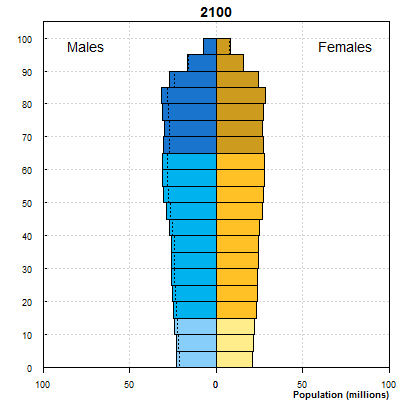 By 2100 India will be by far the largest country in the world, peaking at some half a billion more than China. But its population will be coming down. It too will have a large ageing society. 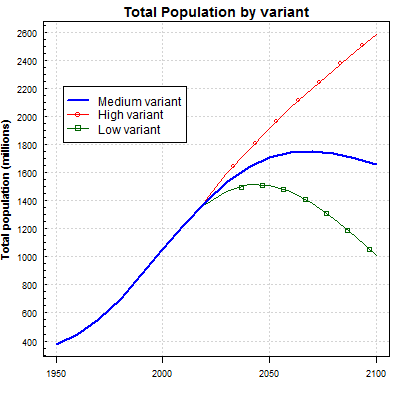 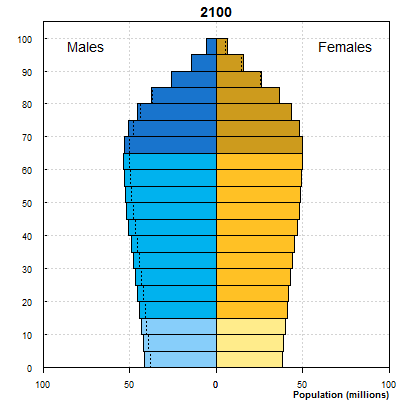 This is where things change. Nigeria has mighty demographic momentum. See how the diagrams look completely different: 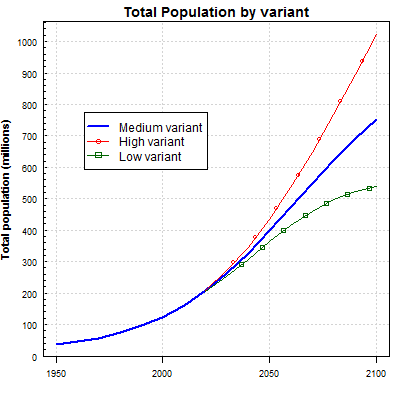 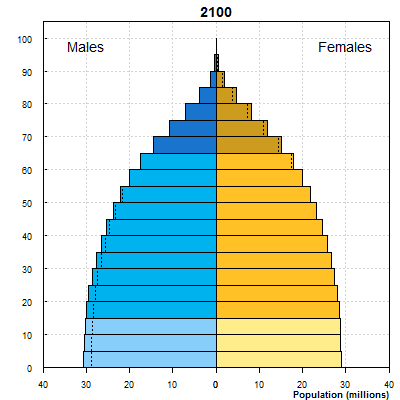 By 2100 Nigeria will be closing in fast on China as the world’s second largest country (at around 800 million people) with still far more people of child-bearing age than oldies. Boom! Check out the graphs for other African countries – many have similarly dynamic profiles in both relative and absolute terms.

Basically, ‘white’ and especially ‘European’ people as understood for the past three or four centuries are in both relative and absolute decline, with ‘brown’ or ‘black’ people inexorably replacing them as the planet’s dominant political and cultural forces, and the world’s peoples in general getting (and so looking) more genetically mixed in a melting-pot sort of way. It’s happening today, before our very eyes, as Africans, Asians and Arabs in their thousands attempt and often succeed to enter Europe as ‘migrants’ but outside normal legal procedures. Today’s strident Leftist politically correct emphasis on ‘diversity’ and ‘migrants’ in various Western societies reflects and anticipates these huge trends, with a crude not-so-sub-text: Your time is over, check-your-privilege imperialist European Whitey! Shut up and know your place! Modern feminism with its belligerent ideological sneering at the very idea of family life adds further downward pressure on European population numbers.

No Western political party (US or Europe, but especially Europe which is so much closer to Africa and the Middle East) knows how to cope with all this, and in particular with pressure from outsiders to come and live here: whatever rules are put in place look doomed to be eventually overwhelmed by sheer numbers of people pressing to enter who are not especially impressed by those rules.

Is any more or less democratic state allowed or even able to control its own borders any more? And, gulp, if our very borders start to erode, then what? Doesn’t international order itself fray in a dangerous way? Yes:

What if international borders around the world are now much less robust than they look and we assume? What in fact is stopping a new brazen ‘grab what you can’ attitude emerging in many places simultaneously, at a much faster rate than existing state structures can respond sensibly to? And if it does emerge, what’s to stop it? Conventional weapons and tactics are useless against more or less spontaneous, bottom-up, networked mass challenges to existing ruling elites and their beloved rules.

The UK is making some sort of effort to adapt to these changes, partly because as an unusually open society it has little choice. Poland (for example) is currently one of the ‘whitest’ and least ethnically diverse places on Earth, but in 2100 far more people in Poland (and far more ‘Poles’ too) will have some sort of darker skin as Africans and Asians turn up there and settle and inter-mingle. Will Polish-ness as currently and distinctly defined (language/religion/outlook) be fading in parallel? Probably. Will Poles and other people currently calling themselves ‘Europeans’ huddling together in the ‘European Union’ make any difference to these vast trends? Probably not. Does all this matter? Not much to non-Poles and non-Europeans, and they are the planet’s massive and growing majority.

Who wins the future? Those who show up.

Who wins the future here? Those who show up here..?