Some quick thoughts (in the order I think them) on the ensuing negotiation with EU partners as London markets bounce back from the early shock.

First and foremost, this is a magnificent momentous day in the global history of democracy. It represents a strong majority of one of the most powerful countries in the world defying its on political/media establishment and saying that they do no consent to the UK’s current relationship with the European Union (and perhaps to that Westminster establishment too). Regardless of what happens next on the UK/EU front, the consequences of this vote will ripple on down the decades, in Europe and far beyond.

Second (and accordingly), every EU leader will now be looking nervously over his/her shoulder at what voters really want. There has been far too much smug we-know-best elitism for years in the way the EU runs itself as an arcane cabal that only a few self-selected high priests can understand.

Third, the real European decisions in the weeks and months ahead will come not from the Commission or the ghastly European Parliament, but from national leaders as they alone feel voters’ hot breath on their necks and see their own markets rocking. They face painful choices. What to do? How to do it? What timescale makes sense? Who does it? Is this a job for an EU inner core of some sort – maybe the Founding Six? But then what about Poland and all the others?

The formal procedure if an EU member state wants to leave the EU is TEU Article 50. Earlier analysis here. And the full text of Article 50 here:

1. Any Member State may decide to withdraw from the Union in accordance with its own constitutional requirements.

2. A Member State which decides to withdraw shall notify the European Council of its intention. In the light of the guidelines provided by the European Council, the Union shall negotiate and conclude an agreement with that State, setting out the arrangements for its withdrawal, taking account of the framework for its future relationship with the Union. That agreement shall be negotiated in accordance with Article 218(3) of the Treaty on the Functioning of the European Union. It shall be concluded on behalf of the Union by the Council, acting by a qualified majority, after obtaining the consent of the European Parliament.

3. The Treaties shall cease to apply to the State in question from the date of entry into force of the withdrawal agreement or, failing that, two years after the notification referred to in paragraph 2, unless the European Council, in agreement with the Member State concerned, unanimously decides to extend this period.

5. If a State which has withdrawn from the Union asks to rejoin, its request shall be subject to the procedure referred to in Article 49.

Note that there is nothing to say when Article 50 is triggered by the country concerned. That’s why David Cameron has wisely left it to his successor as Prime Minister to decide that in a few months’ time. Likewise it’s up to the country concerned to ‘decide to withdraw’; the others can’t throw a member out.

Once Article 50 is triggered, there is up to two years (or more if all concerned agree) to negotiate a new agreement between the withdrawing state and the EU.

The smart thing now as I have argued at length here and elsewhere is for key European leaders to st down calmly but with some new urgency and consider what new arrangements as between the EU/UK and for the EU itself are going to be credible and sustainable with voters. Whatever happens the EU treaties now have to change in the coming years. It’s highly unlikely to be possible or desirable politically simply to have everything else continuing as before but with the UK not in the EU club.

In other words, the legal forms are important but they don’t matter. What matters is answering the key strategic questions. Then you find the legal language to make it all happen.

It follows that the key negotiations can be conducted and concluded in a couple of years without Article 50 being triggered at all. Or, perhaps, Article 50 will be triggered only when the clear outlines of a New Deal have been identified, with the Article 50 process kicking in to launch the legal formalities needed to finish things off.

In short, all sorts of options are possible. So don’t panic if no one option quickly emerges.

Boris Johnson has just said that there is no need to invoke Article 50. Strictly speaking that’s (maybe) right, but I can’t imagine how we might end up in a good position without going through at least some A.50 formalities.

Fourth, on substance. The least disruptive result for everyone in procedural terms is some sort of Norway Plus option, ie the UK joins the EEA. What, you’ve never heard of the EEA (or for that matter EFTA)? Here’s a handy summary. We’d withdraw from participation in many key parts of EU life (CAP, ECJ, European Parliament etc and so on) as the price we pay for not having a say in setting Single Market rules. But even then there are ways to have a reasonable say indirectly. We’re a huge market for EU stuff and it’s in everyone’s interests to keep things ticking along as far as possible.

The political problem with this for the Brexiteers is that the UK stays with the Single Market and so continues with free movement of people, ie MIGRATION. But at least for now the EEA option is a reasonable compromise. The more so if a parallel fundamental process emerges to renegotiate Europe 2.0, where the outcome is that some countries stick with the stern Eurozone disciplines and others opt for a lighter Free Trade space.

Fifth, it’s possible that we won’t formally leave the EU for several years to come. Or, perhaps, at all. Who knows if something else will happen leading to a new referendum on a different EU with a different question and a different result?

It’s also possible that we’ll formally leave the EU and eg join the EEA/EFTA in only a few months’ time IF London and key capitals decide that this is the swiftest safest way to get things stabilised.

Between those two possibilities – we leave the EU within months, or never – lie all sorts of sub-options. Don’t take any notice of anyone saying that X or Y or Z ‘must’ happen. There is no ‘must’ here. Just choices that we know now, and choices that may not yet exist but will start to exist as the talking starts.

Sixth, who has the ‘upper hand’ when the UK/EU sit down to talk? Won’t they have to punish us for rocking the boat?

All successful negotiations involve from Positions to Interests/Needs. All negotiations are basically about Security, Resources, Control, Reputation and Time/Risk.

Back to where we started. Yes, all other EU member states have their own interests. Above all, their respective leaders are keen on survival. So they have to make some fine choices between ‘punishing’ the UK for giving its revolting voters a voice, and making sure that their own voters are kept happy. 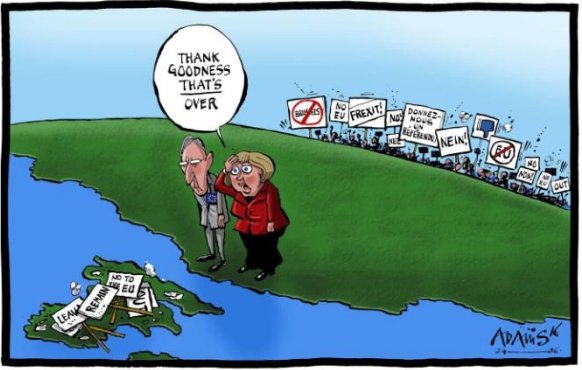 This is why EU HQ in Brussels is already pressing the UK to make its proposals ‘quickly’. But as we have seen, nothing much specific will come from London until after the summer break and we have a new PM to drive the process ahead. Other national EU leaders in capitals will want to get into quiet informal discussions with London asap to start drawing up a Plan that can be developed later this year.

In this situation neither ‘side’ has the upper hand. As this morning’s storms on world markets have shown, the planet’s investment money is not interested in European leaders bickering. It wants ‘stability’ and there will be huge pressure on all leaders to project ‘stability’ and act responsibly.

NB that as EU HQ has already emphasised this morning, the UK’s membership of the EU continues until it doesn’t. We continue with all the benefits and obligations of membership until we are no longer members. That means that we retain all the levers we already have for thwarting any major moves to ‘punish’ us for this decision. The more so since many EU capitals who might want to give us a good spanking will now have to reckon with their own voters clamouring for some of that old-fashioned British democracy. What? Punish UK voters for actually voting? Are you out of your minds? Quick – dust off those tumbrils!

Let’s start building Europe 2.0 together. The only way forward now is to talk sensibly and accept that We Now Have Something Completely Different.