Back in the mists of early 1998 I was sitting in Sarajevo at the Embassy perusing Viz issue 87 (as one did) when my eye fell upon an unexpected Balkan angle: 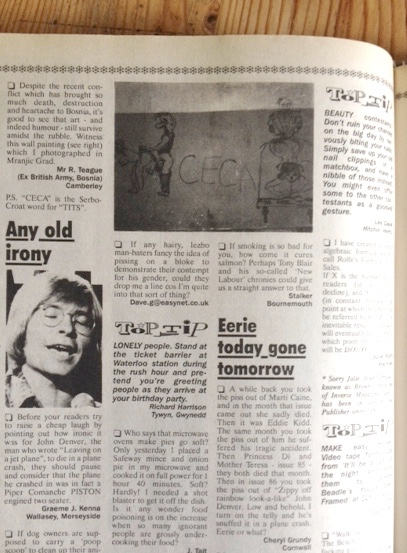 This analysis did not look right. So I did some diligent research and reached a deeper insight into what was really being said here. I duly wrote a letter to the Editor that appeared in Viz 89 April/May 1998. Here it is, in all its glory: 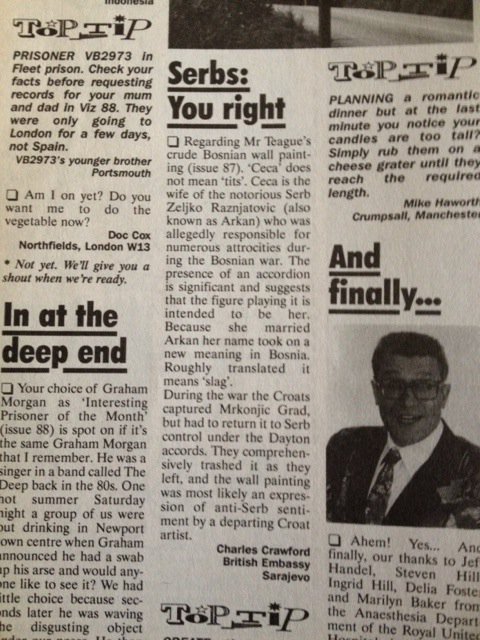 Accuracy is all. Especially when confusing Ceca with sise in Serbian.

Thanks to Simon at Viz for finding/sending these old pieces concerned with lightning speed.

More on Viz here: “a very easy word to write/remember, as it consisted of three letters which are easily made with straight lines”. Not *coughs* quite as all-powerful as it was in its heyday, but lots of direct hits on plump targets. And Top Tips. My favourite two:

The comic strips. Not least The Modern Parents:

Malcolm and Cressida, are extremely pompous and self-absorbed believing themselves to be morally and intellectually superior to other people, often waxing lyrical about issues such as environmentalism. Their two sons, Tarquin and Guinevere (who was given a girl’s name as his parents didn’t want to conform to gender stereotypes) are more down-to-earth, with Tarquin often, usually unsuccessfully, trying to reason with his parents’ way of living.

And Student Grant – surely no-one like this actually exists:

A University student named Grant Wankshaft, attending the fictional Spunkbridge University, one of the former polytechnics which became universities in 1992. Grant is pretentious, lazy, smug and conceited, and peppers his speech with the word “actually”. He does little or no work for his degree.

A companion piece to Nude Motorcycle Girl, this strip features a well-endowed young nun who fights crime and saves orphans while riding on a skateboard – naked except for a wimple, a sensible skirt and big clumpy shoes

You get the general idea, I think.