Russia: The Cost of Ukraine

One of the best ways to spend a dreary UK summer is to play with the World Bank graphs on Google to mix ‘n’ match different countries’ economic performance. Just click on a category and then compare/contrast the results for different countries.

This (for example) gives some sense of the cost to Russia of its various attacks on and incursions into Ukraine in the past few years.

Take GDP: one broad crude indicator of how a country’s doing. To save space I’ve left out the vertical axis showing the total GDP.

Russia in 2006 was at some $1.3 trillion. After the global crisis in 2007/08 it climbed strongly to $2.2 trillion, by far its best result since the end of communism. But then (giddy with success?) the Kremlin launched its Ukraine attacks and destabilisations, and Russia’s economy slumped backwards. It’s now somewhere near its 2005/06 level. 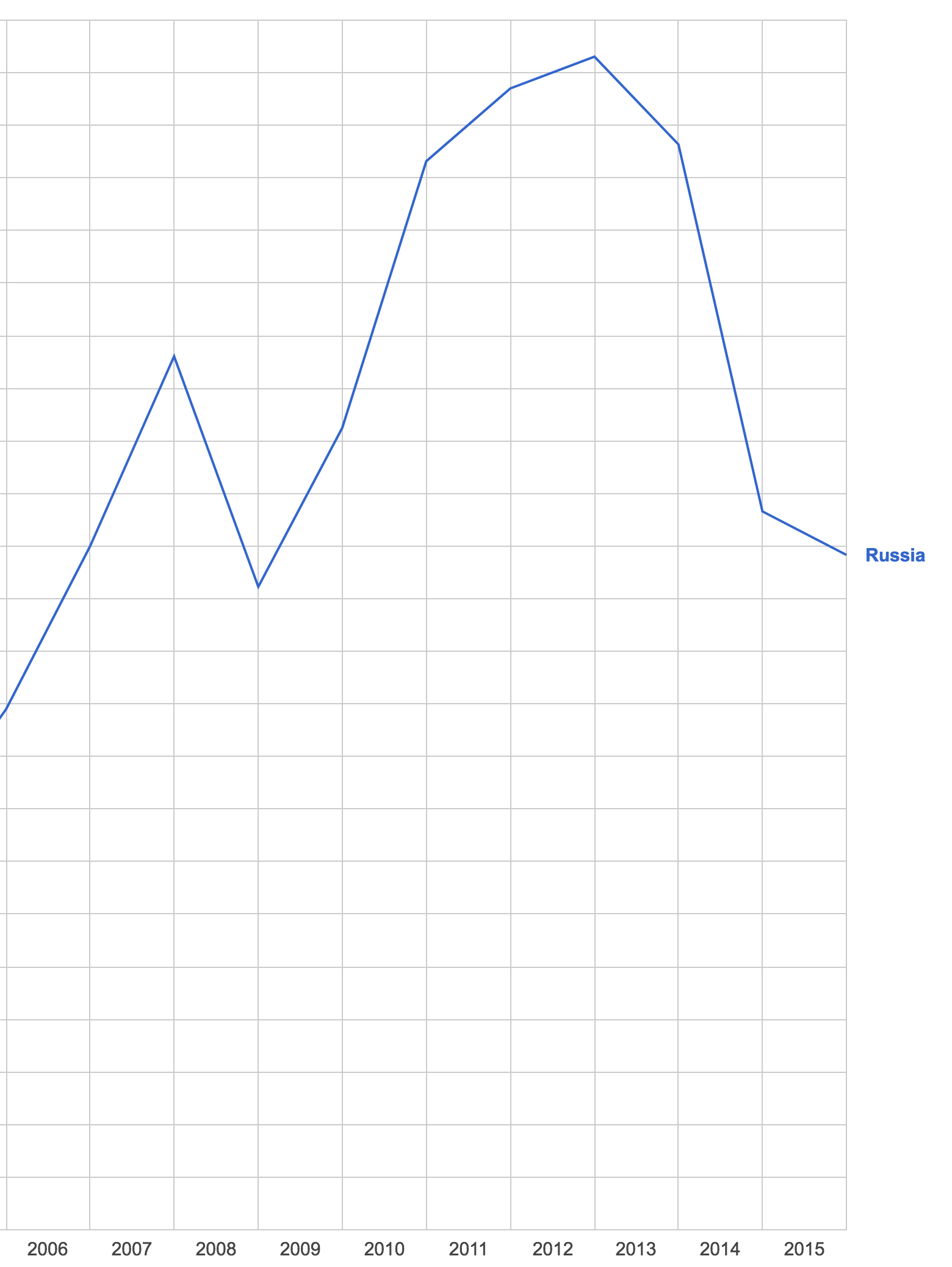 Not that Ukraine has done any better. Look at Ukraine as compared to Russia and Poland: 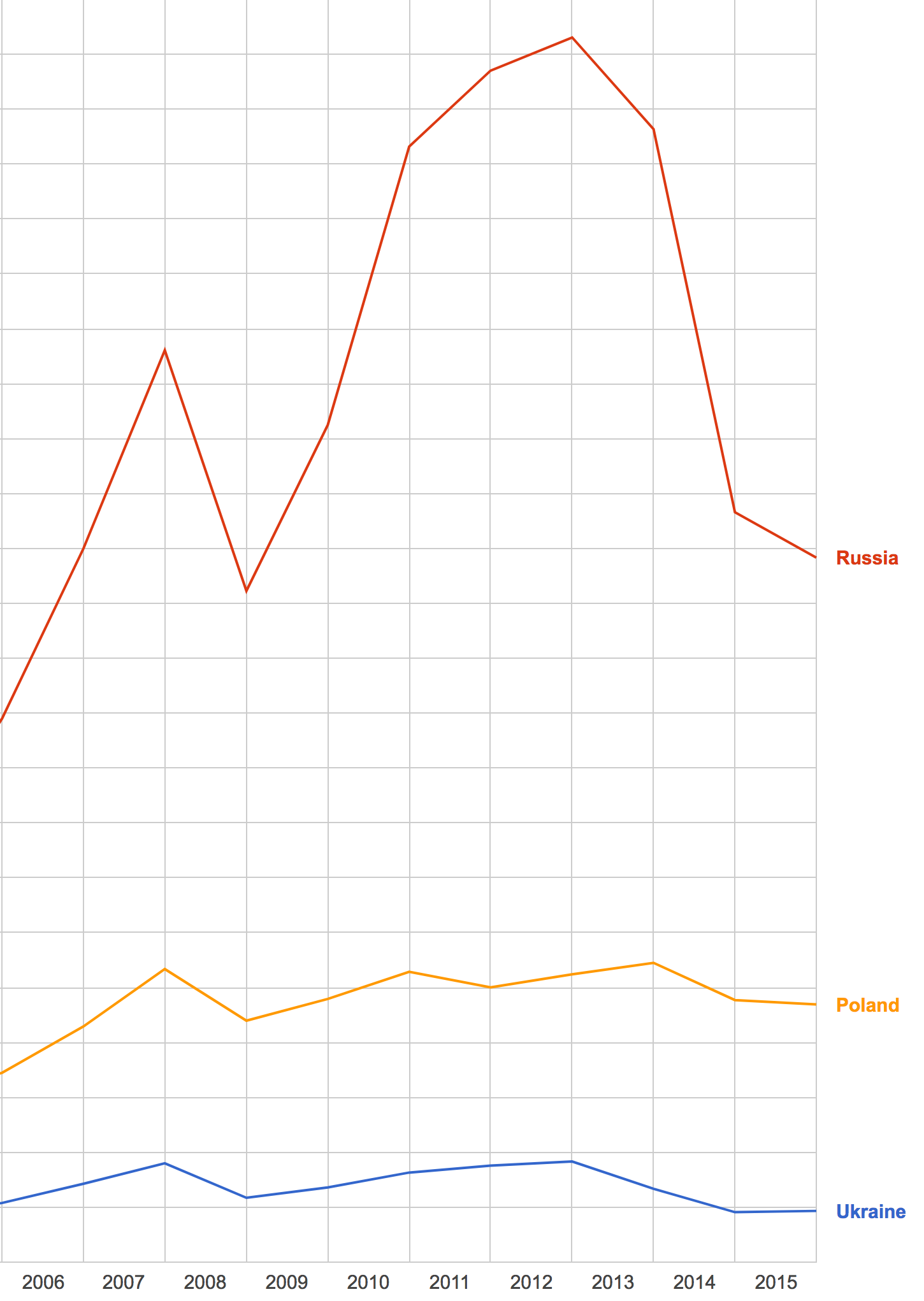 Ukraine’s performance since independence is dismal. Back in 1990 it was a tad ahead of Poland. Poland has grown steadily over the following 25 years. Ukraine not. But such modest growth as it had from 2008/12 has been slowed if not reversed thanks to Russia’s policies.

Let’s put these numbers in a different perspective by adding the UK and Germany. Gulp! UK drifting backwards too these days. But UK is still at some $2.6 trillion (more than double Russia) and Germany is a strong notch bigger again at $3.5 trillion.

In 2012 the gap between Russia and Germany was at the height of Russia’s post-communism success was down to $1.5 trillion. Now in good part because of Russia’s Ukraine policies the gap has doubled – and is growing nicely. 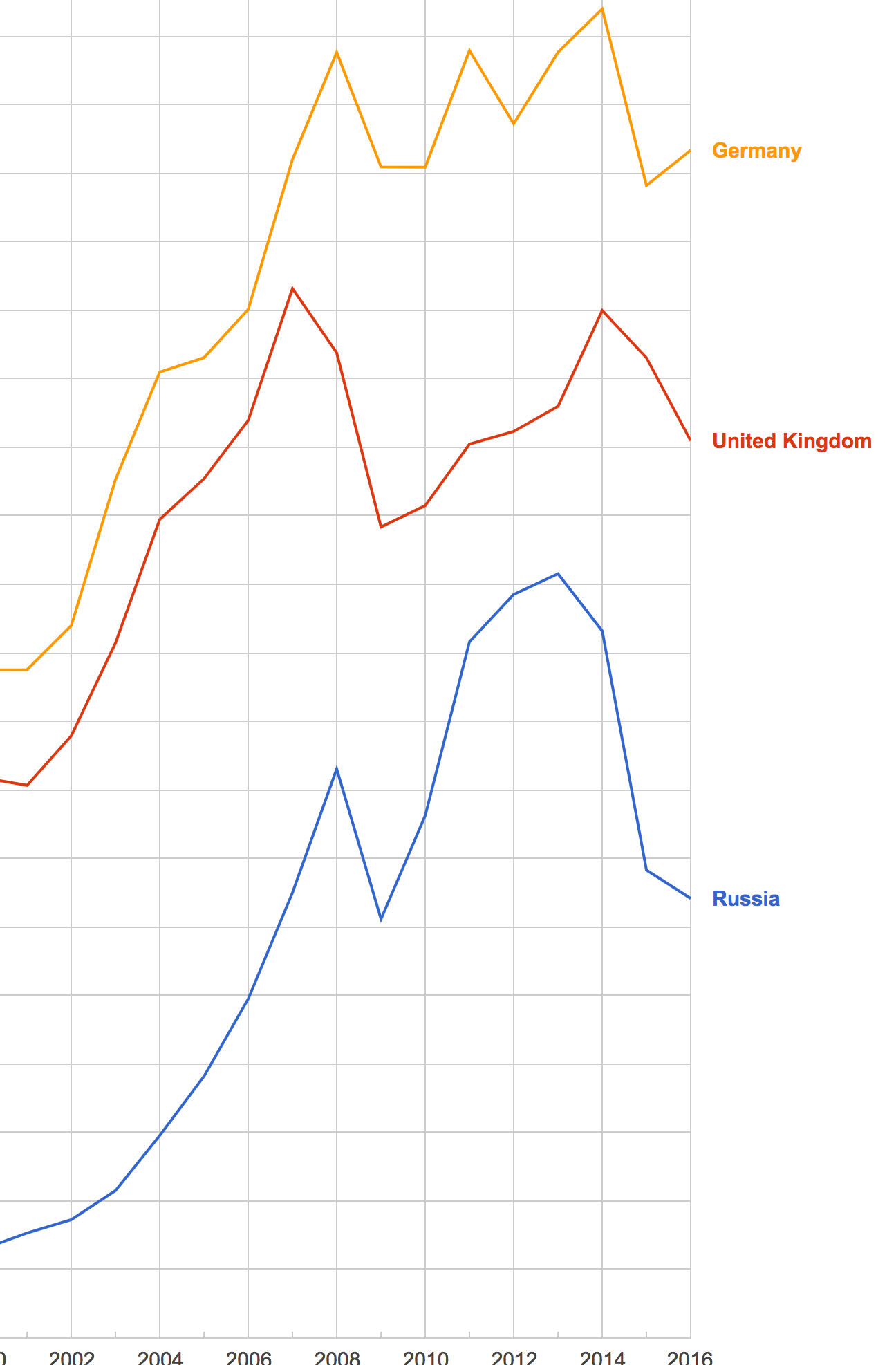 What about further afield? How’s Russia doing as compared to China and India?

Look how India has outperformed Russia since 2006 when their GDPs were roughly comparable. India is now $1 trillion richer, and again the gap is growing.

But … China?! In 1990 China’s and India’s GDPs were roughly similar at a paltry few hundred $billion. In the 1400 weeks since then, China has soared to over $11 trillion. Lo! The staggering compound interest effect. If all goes as well as it possibly can for India for the next century or a century or two after that, it probably can’t catch China. 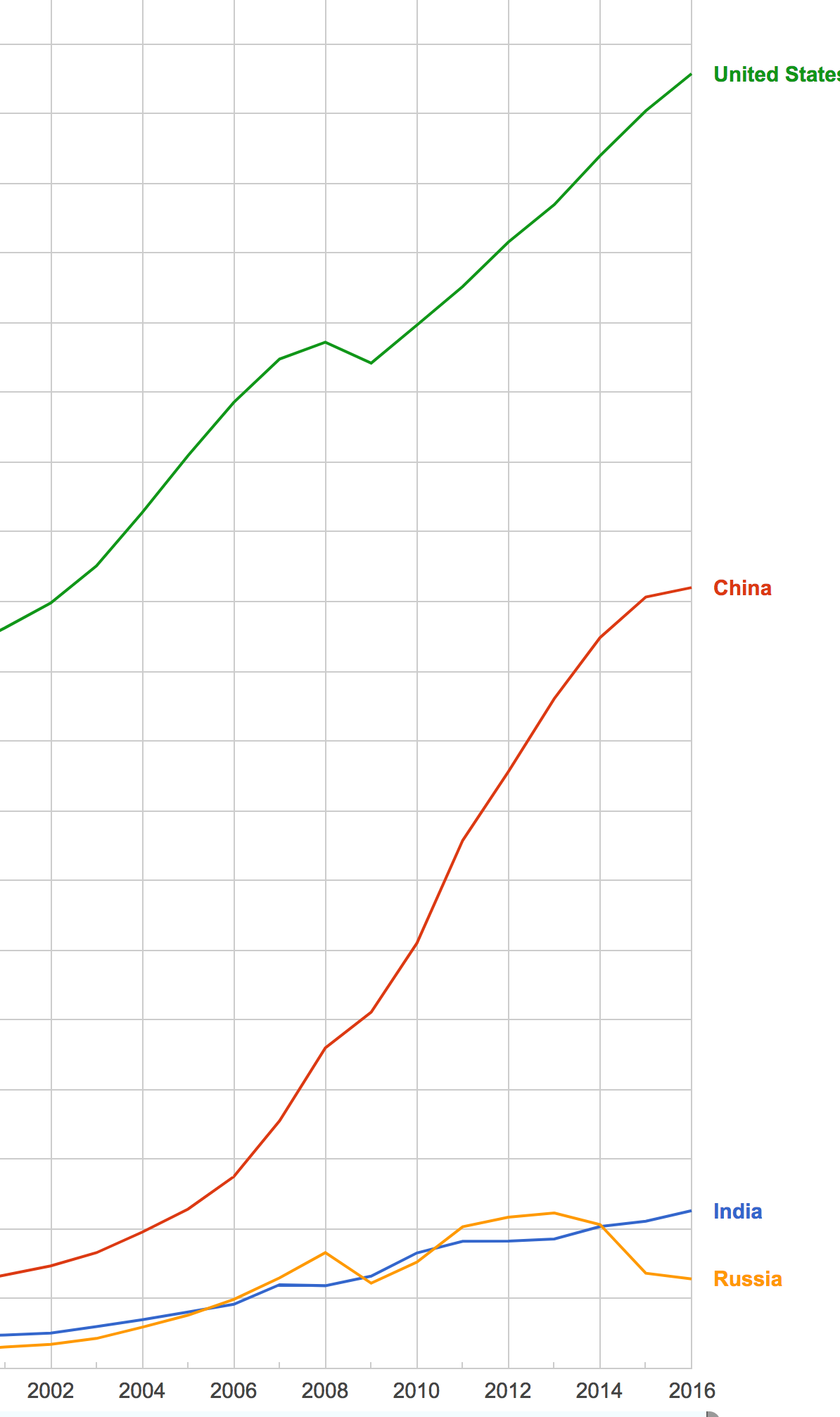 Yes. The USA is the champ of champs. It just keeps on piling up the GDP, now at a vasty $19 trillion and upwards. Since Russia escalated its Ukraine machinations in 2012, the USA has piled on a further $3 trillion, while Russia has lost $1 trillion. That’s a lot of clever new military kit afforded, or not.

In just a couple of hundred weeks, Russia has lost TRILLIONS of dollars. Had it not played all its greedy games in and around Ukraine and not grabbed Crimea, Russia might well now be at a GDP of $3 trillion and growing steadily. The unfeasibly enormous costs to Russia of its current policies will echo on down the decades.

It would have been far cheaper to offer Ukraine an honest deal to buy Crimea. Everyone – and above all Russians, Ukrainians and Crimeans themselves – would have been better off.

The Compounding Costs of Stupidity just keep on compoundin’ away.