On 06 Aug, 2017 By Charles Crawford   |  Category – Balkans, former Yugoslavia / British Politics and Society / Mass Media and the Internet / Men, Women, Gender / The Art of Diplomacy / The Law and Legal Issues

As we approach the twentieth anniversary of the death of Diana, Princess of Wales on 31 August and the world pores over its memories, it becomes appropriate to describe what happened during her visit to Bosnia and Herzegovina if only for the sake of historical exactitude.

By summer 1997 Diana had been divorced for a year and was (one might argue) the most popular person in the world. I had previously met her in 1995 (before her divorce) when she visited Moscow for a charity award. That visit is nicely remembered here. Over lunch hosted by the UK ambassador Sir Brian Fall she explained with disarming frankness the problems she was having finding any private life at all for herself and her sons.

Also in May 1997 New Labour won its landslide election. Everything was new! Cool! Edgy! Full of energy! It was inevitable that the top brass of New Labour in the form of T Blair and P Mandelson would be close to Diana. She was famous! And unstuffy! And so were they!

By then I was UK ambassador in Sarajevo, running around with the rest of the ‘international community’ trying to rebuild Bosnia and Herzegovina after the war.

Thus it was that a few weeks after Labour’s election win we were told by London that Diana, Princess of Wales was planning to visit Bosnia under the auspices of the International Red Cross, to promote her humanitarian work against land-mines. Here is the impressive speech she gave on that subject in June 1997:

There are said to be around 110 million mines lurking somewhere in the world – and over a third of them are to be found in Africa! Angola is probably more heavily mined than anywhere else, because the war went on for such a long time, and it invaded so much of the country. So that country is going to be infested with mines, and will suffer many more victims.

And this brings me to one of the main conclusions I reached after this experience.

Even if the world decided tomorrow to ban these weapons, this terrible legacy of mines already in the earth would continue to plague the poor nations of the Globe. “The evil that men do, lives after them “

And so, it seems to me, there rests a certain obligation upon the rest of us …

We were also told in firm terms that it was NOT the embassy’s job to help Diana promote her work or her public profile: our ONLY role was to make sure that as the mother of our future King she had a safe visit, and we should work closely with Red Cross colleagues, NATO forces in Bosnia and the Bosnian authorities in that sense.

Fine. This would be interesting.

It did not take long for someone to point out that the head of the Red Cross in Republika Srpska (the Serb-dominated ‘entity’ in Bosnia) was none other than Ljiljana Zelen-Karadžić, wife of top war crimes suspect Radovan Karadžić. Even if Diana did not include Republika Srpska in her visit, that amazing fact would become a huge part of the story. Far from getting planetary praise, the International Red Cross would come under horrible embarrassing pressure. The visit could be a PR debacle.

These thoughts were conveyed to the ICRC, who decided to abandon the idea of this visit. Word wended its way back to us that Diana thought that the ‘establishment’ was plotting against her to block her humanitarian work, whereas of course the establishment (at least as represented by me) was protecting her from a fiasco.

So that was that. Or so we thought.

Robin Cook as the new UK Foreign Secretary duly visited Bosnia on 28-29 July for a visit that itself was fraught with interest: could the Bosniac leadership expel the annoying UK ambassador for briefing the Foreign Secretary to talk about corruption? No!

That visit took place on the Monday and Tuesday. By Friday afternoon we were back in Sarajevo recovering when we get an urgent message from London:

Diana, Princess of Wales is landing in Sarajevo NEXT WEEK for a visit sponsored by a small NGO the Landmine Survivors Network.

Same as before. Your role is to make sure the visit passes off safely and no more. If it is a complete mess because it’s organised at such short notice, that’s not your problem.

I told London that this was absurd. Things in Bosnia were, for reasons blindingly obvious to anyone, highly problematic in security and other terms. How could a visit with all the profile it would attach be organised safely at such speed? I recommended firmly against.

It became clear over the weekend that New Labour at the highest level wanted the visit to proceed. Proceed it would. My job was to help make that happen. The Landmine Survivors Network were in charge of the programme, and I should meet them asap to sort it all out.

Two friendly LSN people heading the visit duly appeared in my office on Monday 4 August to discuss how it would all work. They emphasised that this would be a low-profile visit. Security could accordingly be light. Diana would not need an interpreter – she would ‘talk the language of human understanding’ with the landmine victims she met. They showed me the proposed itinerary – it was of course confidential.

I pointed out to them that scores of world media folk were already arriving in Sarajevo. I showed them a fax copy of the page in the Daily Mail in London that morning describing exactly where she would be going. How had the newspapers got that information? This visit would not be ‘low-profile’. It would be altitudinous-profile. What did the LSN think they were dealing with here?

The LSN looked rattled. They departed on a visit recce with some light embassy support. They reappeared a day or so later, ashen-faced at the scale of the job. Yes, an embassy interpreter would be more than welcome. And could the embassy please help manage the media circus at each venue?

We deployed two mighty FCO weapons. Steely David Slinn was whisked down from the embassy in Belgrade to bludgeon the media throngs into submission. And our own Amira Vejzagić-Ramshorst, a gracious Bosnian with beautiful English working in the Sarajevo embassy, would accompany Diana and help with the interpreting.

Diana landed in Sarajevo on Friday 8 August. I had the modest protocol task of greeting her off the plane with the LSN team and escorting her to the waiting cars to whisk her off on her tour of land-mine areas. Here we are.

I returned to the embassy. The visit unfolded away from my own beady eye.

They returned to Sarajevo. On the Sunday I hosted a quiet farewell lunch for the Diana and the LSN team and some international dignitaries at a restaurant high above the city. Grilled meat was served. Diana did her best to chat to people, but it was obvious to me at least that she was distracted and keen to leave. She left.

David and Amira told me in vivid detail how the visit had gone. Not easy. But we had done everything expected of us perfectly and under extreme pressure, as had the Bosnian authorities with gallant NATO support, so that was good.

The following week the story breaks that Diana has been ‘romantically involved’ with Dodi Fayed. It is now clear why Diana had had her thoughts elsewhere at that final lunch – she knew that an explosion of media interest was looming, and that that could overwhelm positive coverage of any humanitarian work she was doing. Here’s what looks like a pretty accurate account of the sequence of events.

Fascinating though all that scandal might be to the planet, we in Bosnia in those halcyon pre-Internet days pressed on with our busy peace-building work. But I thought that it would be a good idea at some point to let London have some personal senior thoughts on how the visit had gone, and the difficulties we had had in setting it all up without any proper ‘private secretary’ person working with Diana to smooth things along: this might help any other embassy faced with such drastic protocol and security issues at impossibly short notice.

So I drafted some suitably frank and highly classified observations, and off they went to one or two people FCO on the afternoon of Friday 29 August.

I forget now when exactly Diana’s thank you letters reached us by the diplomatic bag – before or after her crash? But here’s the one she sent me: 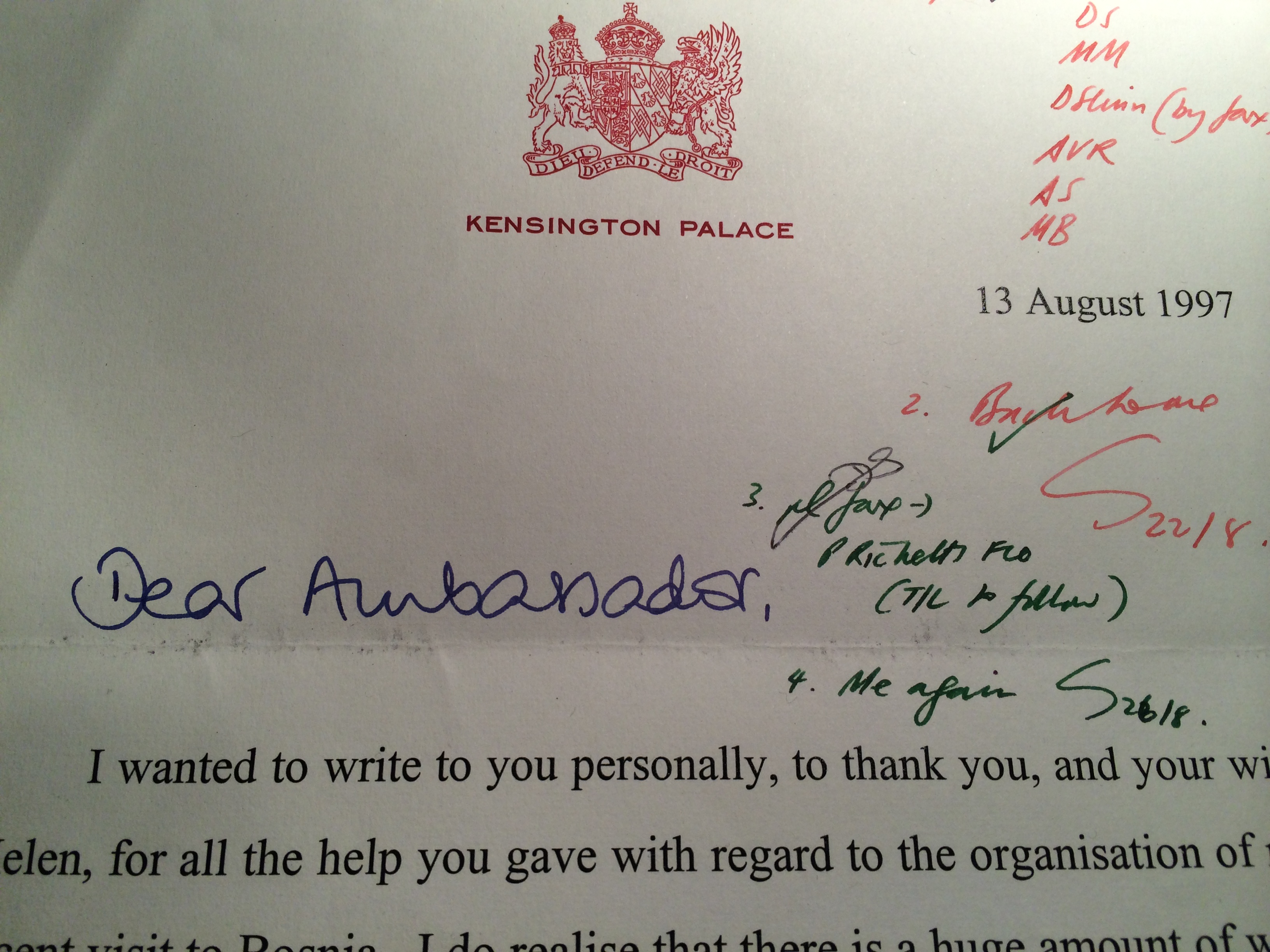 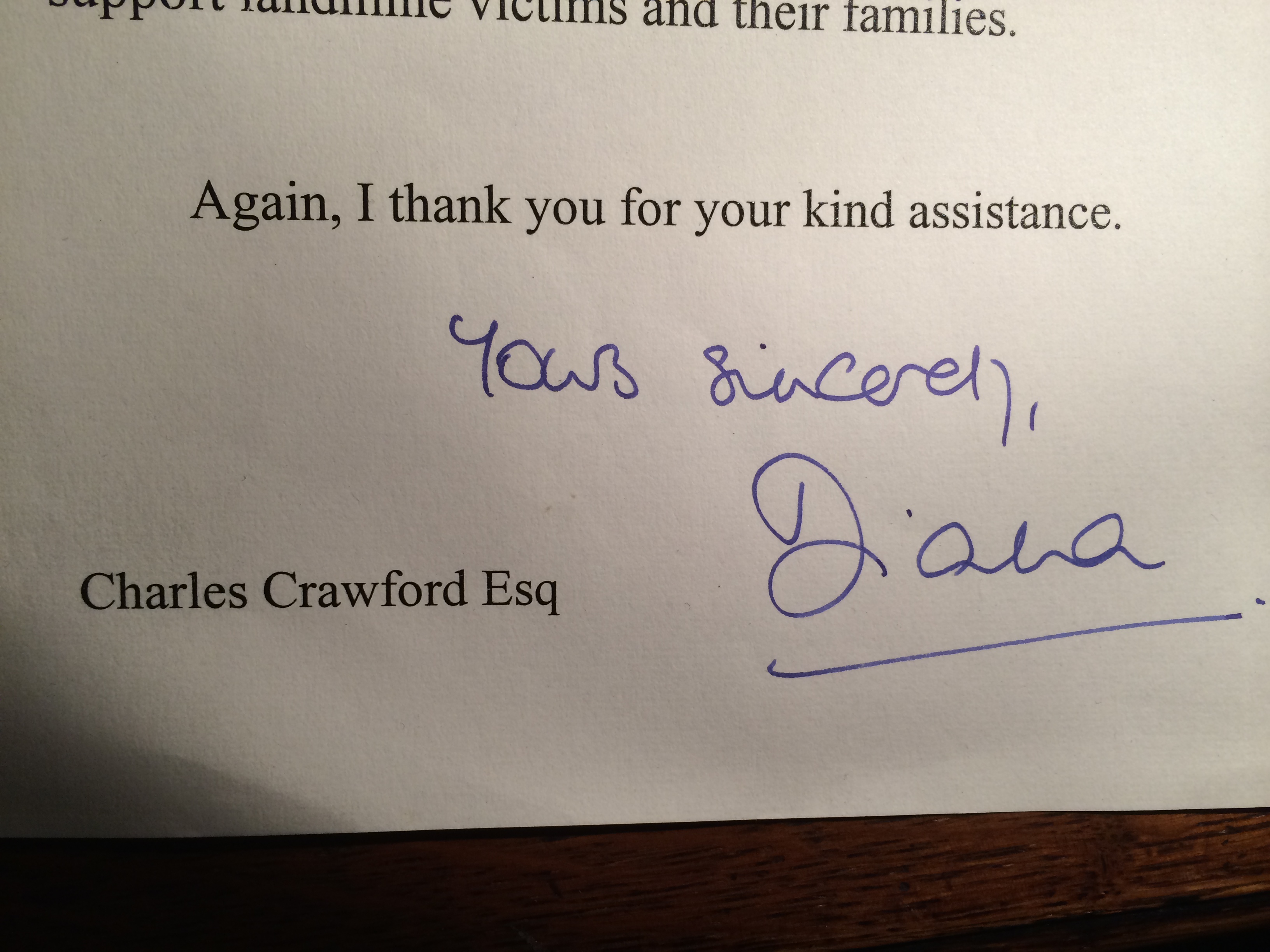