On 19 Aug, 2017 By Charles Crawford   |  Category – Africa / Negotiation Technique / The Art of Diplomacy / The Law and Legal Issues

Mrs Mugabe has got involved in another scandal, this time the alleged beating of a model in a Johannesburg hotel. Should she be given diplomatic immunity to help her return home without prosecution?

The government source accepted the view widely held by legal experts that Grace Mugabe was not entitled to immunity because she was in South Africa for medical treatment, and said the government was expecting her immunity to be challenged in court.

However, the source said Pretoria justified its decision because of other countries in southern Africa that supported South Africa’s ruling ANC in the long struggle against apartheid would also see Grace Mugabe’s prosecution as a betrayal.

“There would obviously be implications for our relations with Zimbabwe. Sadly the other countries in the region are watching us and how we are going to act,” the source said, asking not to be named.

“What is likely to happen is that she will be allowed to go back home, and then we announce that we’ve granted diplomatic immunity and wait for somebody to challenge us.“

Readers here know all about diplomatic immunity. Basically, you don’t get it in country X merely by virtue of being important in your own country Y. Country X has to grant it to you so that you can carry out specific functions that are lawful under international law.

See all the lofty judgements on different aspects of the Pinochet case. And the fact that Ecuador can not proclaim J Assange to be an Ecuador diplomat with full diplomatic immunity and watch as he strolls unchallenged to Heathrow.

NB too that what exactly diplomatic immunity means or apples to in any particular case may not be easy to identify. See the DSK scandal in 2011. Thus you might have immunity for anything done during your official duties but not for private activities. So where is the line between official and private? Does it extend to who gets what in divorce proceedings?

Back to South Africa. If Mrs Mugabe was in South Africa on a private visit but then she is somehow proclaimed by Pretoria ‘retrospectively’ to enjoy diplomatic immunity so she can escape criminal or civil liability for her alleged violent actions, that looks (and is) a grubby ploy done for wider state policy reasons. Her alleged misdeeds > the rights of South Africans not to be beaten by arrogant foreigners in their own country.

Such is diplomatic life. The interesting thing here is how Robert Mugabe seems to exercise a hypnotic influence over his fellow African leaders, despite being one of the most useless heads of state of modern history.

Look at some numbers for GDP: 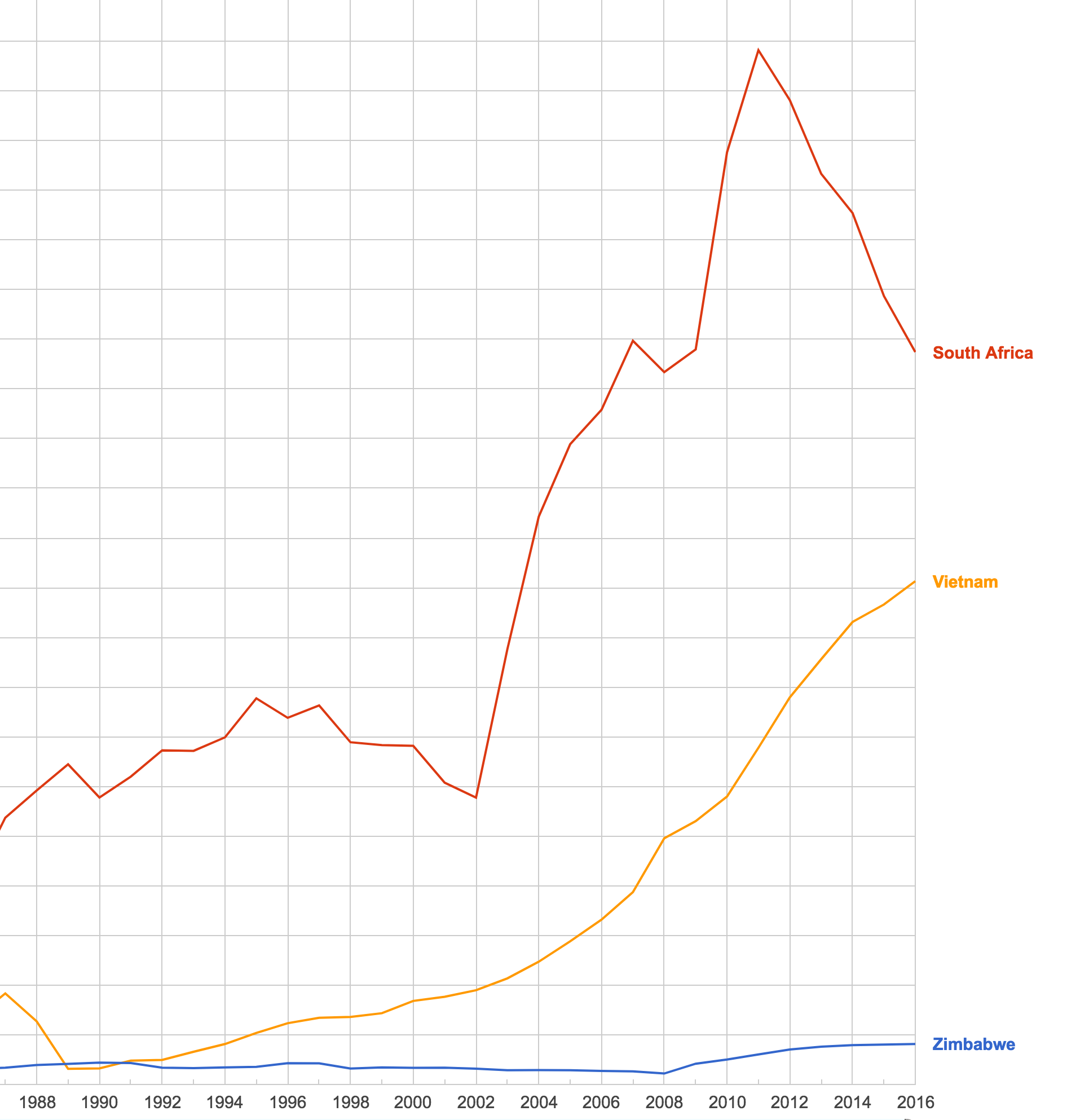 South Africa’s GDP is tumbling nicely thanks to the Zuma Effect, but it is still at some $300 billion. Mugabe has presided over Zimbabwe for some four decades yet the country is scarcely any richer at a pitiful $20 billion. So why does literally anyone in Africa or in South Africa take Mugabe seriously, to the point of worrying about ‘betraying’ him by prosecuting his allegedly felonious wife? If you want to see how a one-party supposedly socialist state gets its act together, look at Vietnam’s surging performance over the past twenty years.

I recall a story I heard about an African Union event a while back. African leaders had gathered for a summit with sundry international officials in support. Mugabe was the last leader to arrive. His plane was hours late. Leaders and officials alike had to hang around at an uncomfortable sweaty airport waiting for him.

His plane arrived. Mugabe got off. To the amazement of the assembled internationals, all the other African leaders raced to bow and scrape before him. He might be an ailing ridiculous leader who has brought catastrophe to Zimbabwe, but he is the oldest most wizened anti-colonialist leader on the African block. And that’s what counts.