Great news from Iran. Many people there have Had Enough.

In these circumstances where else to start but World Bank graphs? 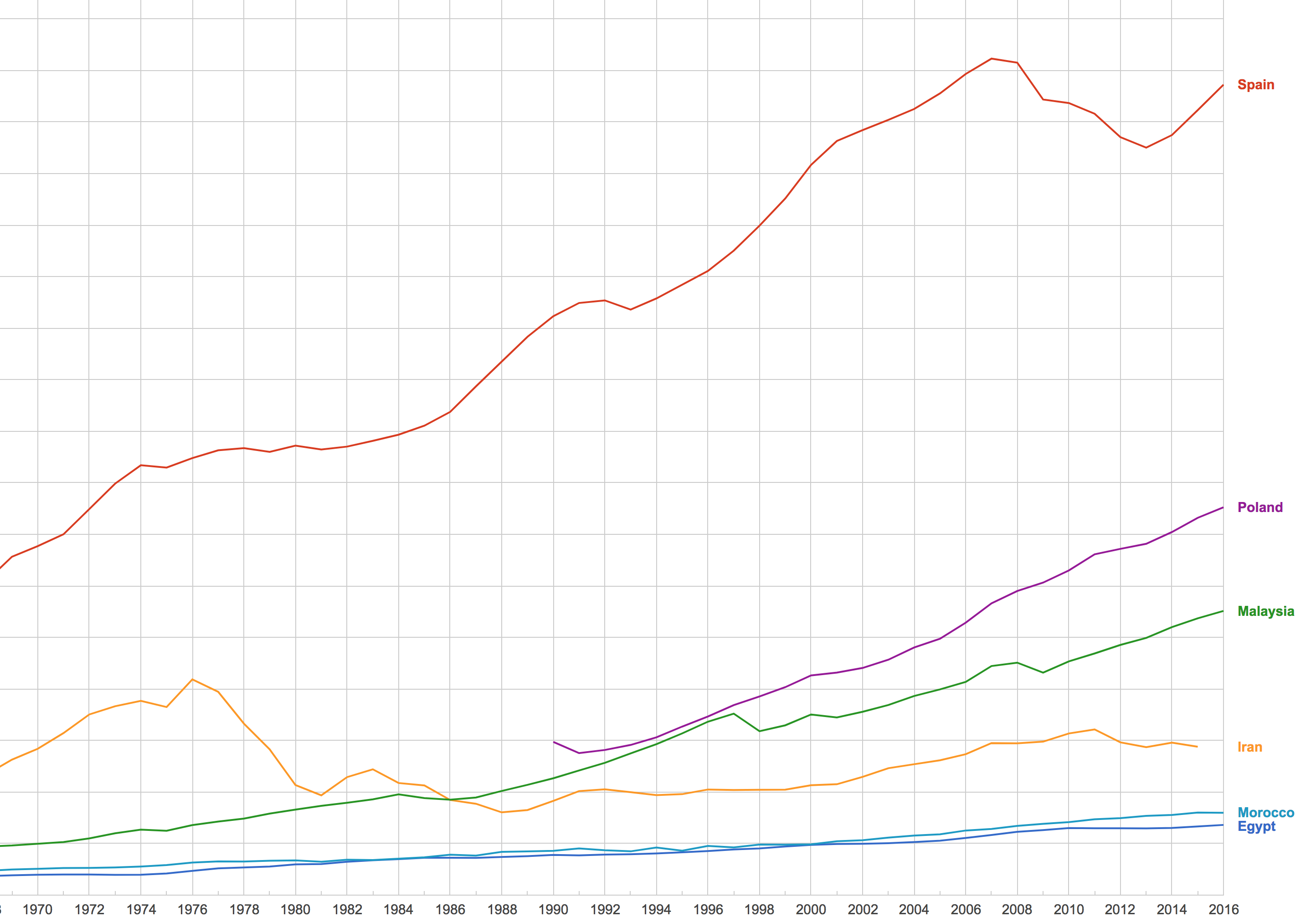 This is GDP per capita since 1970. Note how under the clueless rantings of successive Ayatollahs Iran has managed to spend the nearly four decades since the fall of the Shah struggling to get back to the levels of 1976. And failing. Note how the gap between Spain (for example) and Iran has grown and grown. Or how Poland (for example) has pulled away.

It takes stunning stupidity to have a fast-growing population (Iran’s population has doubled since 1980) and still struggle to increase total GNI. But in recent years those revolutionary Ayatollahs have given it a damn good go. Even Egypt for all its Arab Spring upheavals has done better in keeping steady overall growth. Thanks to its own ruling elite’s fanaticism, Iran is now at the dizzy heights of some USD 500 billion national wealth. Rather more than half the value of Apple. 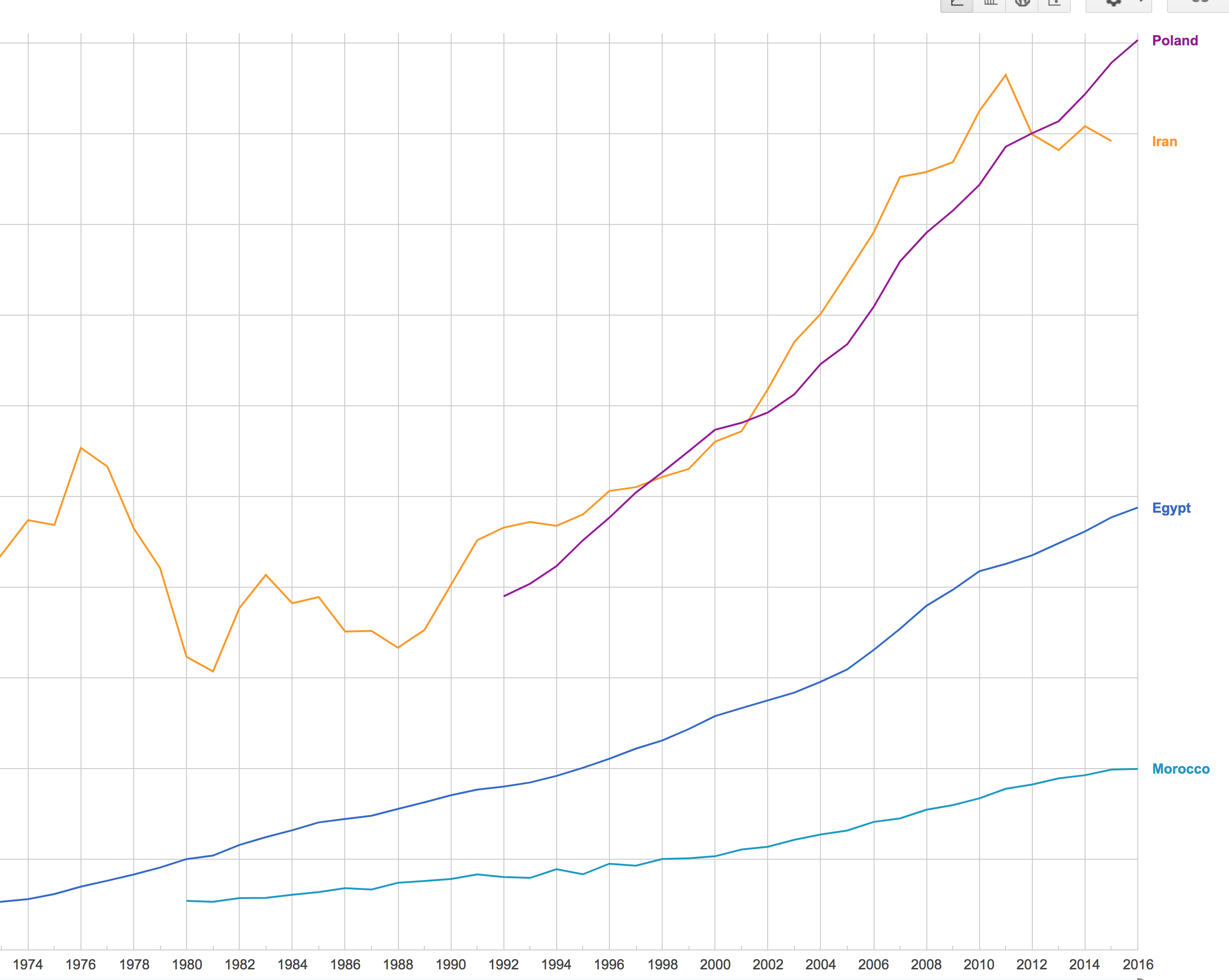 Thus #Iranprotests. And horror in some quarters. What if … what if … the Iran regime falls? And, far worse, President Trump and Israel look pretty happy about it?

Take Simon Tisdall in the Guardian whose nervous excitement drives him to giddy depths of mixed metaphors:

Like birds of prey circling high in the desert sky, Iran’s many foes and rivals are watching the street protests in Tehran and other cities with beady-eyed anticipation.

Hopes that the unrest could trigger regime collapse, voiced openly in the US and Israel, appear premature. But any real or imagined weakening of the Iranian government’s grip could presage a dangerous escalation of regional tensions.

Predominantly Shia Muslim Iran’s efforts to project its power across the Middle East have earned it many enemies. Its expansionist policy gathered pace after the strategic cuffs came off at the end of the cold war, and accelerated following the British-American debacle in Iraq after 2003.

What is a surprise is the sudden eruption of the protests, which had no obvious internal trigger.

A sudden eruption has no obvious internal trigger!

Trump and Mike Pence, his vice-president, voiced hopes Iran’s “oppressive regime” would fall, ignoring the fact that Hassan Rouhani was democratically re-elected as president less than one year ago.

It’s true that Iran has a nice democratic law that lets any Iranian run for President. Hundreds of Iranians, men and women alike, put their names forward. By the rubbish standards of the Middle East, it’s a triumph.

But there’s a catch. Only those candidates approved by the unelected Guardian Council of Islamic clerics get to run. So anyone who is not Islamic Enough (or male enough) gets rejected.

Luckily we have had Christopher Hitchens describing all this for what it really is:

Iran and its citizens are considered by the Shiite theocracy to be the private property of the anointed mullahs. This totalitarian idea was originally based on a piece of religious quackery promulgated by the late Ayatollah Ruhollah Khomeini and known as velayat-e faqui.

Under the terms of this edict—which originally placed the clerics in charge of the lives and property of orphans, the indigent, and the insane—the entire population is now declared to be a childlike ward of the black-robed state. Thus any voting exercise is, by definition, over before it has begun, because the all-powerful Islamic Guardian Council determines well in advance who may or may not “run.”

Any newspaper referring to the subsequent proceedings as an election, sometimes complete with rallies, polls, counts, and all the rest of it, is the cause of helpless laughter among the ayatollahs. (“They fell for it? But it’s too easy!”) Shame on all those media outlets that have been complicit in this dirty lie all last week.

It’s hard to imagine a UK equivalent of this. But it would be something like the Church of England having a small group of male Archbishops who decide which of a tiny number of ultra-conservative male C of E men or British army colonels get to be put forward for election as Prime Minister. Verily, only the Guardian can think that such a Guardian Council is democratic.

Maybe that’s what Iran itself will come to. Christianity there is ‘spreading like wildfire’.

Imagine. Not only does the Ayatollahs’ horrendous rule collapse, but millions of Iranians abandon Islam altogether. That would be something. Quick, send in lots more Bibles.

A weakened, wounded Iran could lash out. It could also prove a disruptive, unpredictable partner for both Iraq and Syria, as well as for Turkey and Russia, currently Tehran’s allies of convenience.

As for the circling American, Saudi and Israeli hawks, they should be careful what they wish for.

A weakened wounded Iran can scarcely be any worse than what we have now. We do not need in the world a strong healthy Iran under current management, not that that is an option anyway.