Assange is Not a Diplomat (4)

On 19 Jan, 2018 By Charles Crawford   |  Category – British Politics and Society / Negotiation Technique / The Art of Diplomacy / The Law and Legal Issues / Writing and Language

You’re all sick of this subject. But via helpful Manfred Rosenbauer on Twitter we get what look like the FCO’s ipsissima verba so why not record them here? 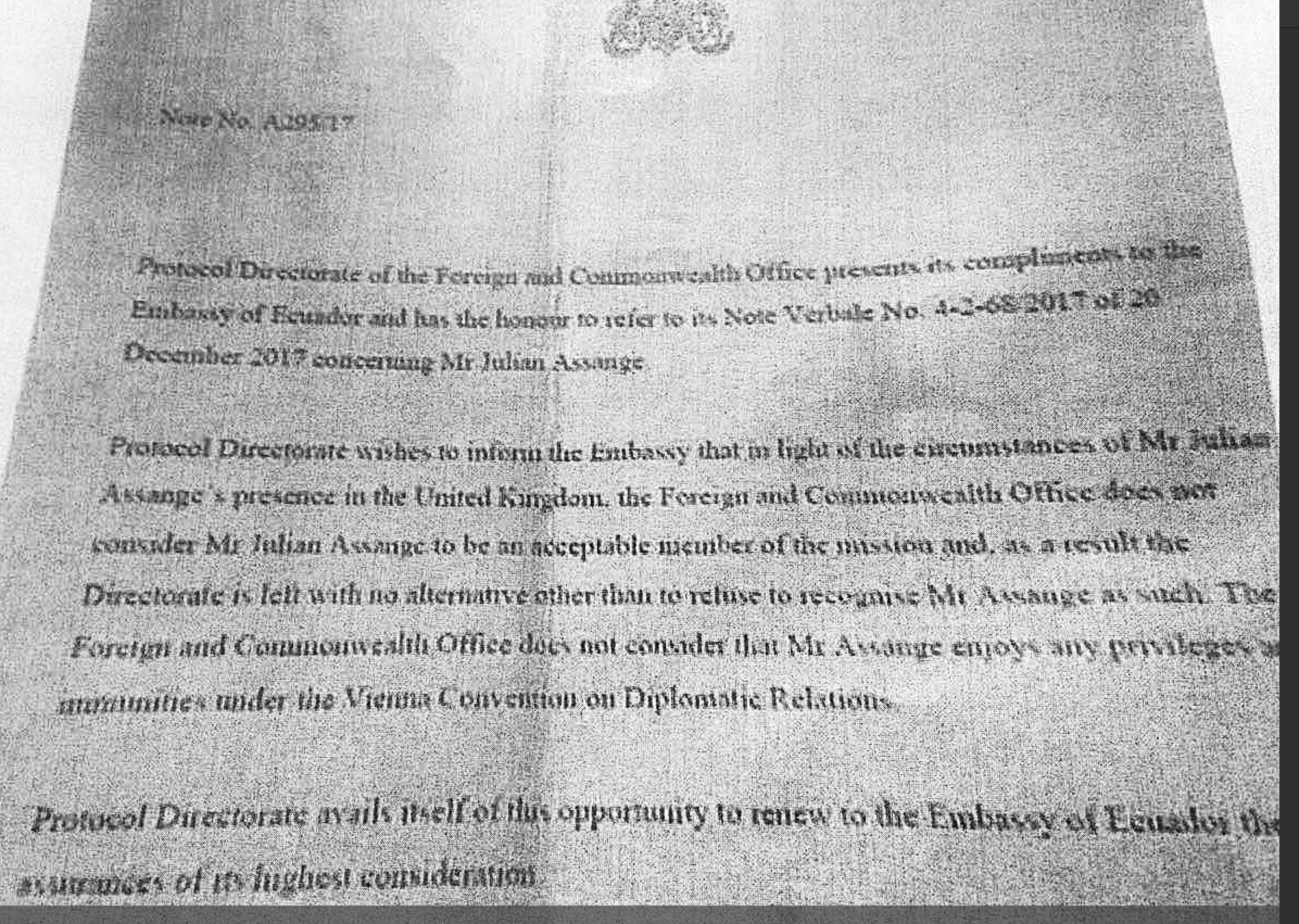 This is a Diplomatic Note Verbale. It’s forms of courtly courtesy go back centuries. No-one knows what a Note that is non-Verbale might look like. Maybe just a drawing?

Read closely what it says. Wily drafting from the FCO’s Legal Advisers:

It does not mention his presence in the Ecuador Embassy. It is studiously vague on what the ‘circumstances’ are. But we all know, or at least we can all have our own interpretation.

Not HM Government? Why? Because under the Vienna Convention such things are within the responsibility of foreign ministries.

This seems to refer to Article 9 of the Convention:

… and as a result the Directorate is left with no alternative than to refuse to recognise Mr Assange as such.

Because JA is not acceptable he is not recognised as being a diplomat of the Ecuador mission in London. He might be recognised as (say) a member of the Ecuador mission to Peru, but then he would have to leave the Embassy to go to Peru to do his honest paperwork, and that means travelling to a London airport when he has no diplomatic status in the UK. Hence he’s nabbed.

The FCO does not consider that Mr Assange enjoys any privileges and immunities under the Vienna Convention.

Just to be quite clear on this one. He’ll be nabbed when he leaves the Embassy.

The tone of this Note is interesting. Definitely more in sorrow than anger:

Ecuador – we hear your pain. It must be ghastly having this scrofulous Assange moping around the corridor for years on end. But we just can’t help you on this one. Just bundle him out of the door and it’s all over.

Over at Craig Murray John Spencer-Davis is making strange whirring noises to himself about all this. But why slug it out on blog posts? The way is wide open for the Ecuador government to challenge this Note and its conclusions in the High Court.

One problem with that for Ecuador is that the UK courts are happy to peer behind the veil of diplomatic immunity to see exactly what is going on when someone appears on the UK diplomatic list as a diplomat, even when the FCO says that that is none of the court’s business.

See the important divorce case of Sheikh Walid Juffali who appeared as a diplomat for Saint Lucia with the International Maritime Organisation in London:

A judge at the High Court in London called the claim spurious, saying that he was satisfied that Juffali had obtained the St Lucia position “with the sole intention of defeating claims consequent on the breakdown of their marriage”

In Assange’s case, it looks *ahem* possible that JA has been given this supposed diplomatic status by Ecuador to avoid UK legal consequences, so the ‘good faith’ of the decision would come under intense scrutiny.