My first post here in a while. We’re planning to move house after some 13 years here, and then it was busy again and the weeks flit by.

Have you heard of Benford’s Law? Me neither. It turns out that it’s a way of exploring ‘unfabricated’ numbers. The gist of it is here:

It has been shown that this result applies to a wide variety of data sets, including electricity bills, street addresses, stock prices, house prices, population numbers, death rates, lengths of rivers, and physical and mathematical constants. Like other general principles about natural data—for example the fact that many data sets are well approximated by a normal distribution—there are illustrative examples and explanations that cover many of the cases where Benford’s law applies, though there are many other cases where Benford’s law applies that resist a simple explanation. It tends to be most accurate when values are distributed across multiple orders of magnitude, especially if the process generating the numbers is described by a power law (which is common in nature).

So, you might (say) apply it to look for otherwise ‘unexpected’ patterns in accountancy/financial numbers. If the numbers don’t obey the law, maybe something odd (and even untoward) is happening.

So far so modestly noteworthy. Therefore what?

How to tell if there was (a) widespread cheating in the US elections (b) on a scale that mattered? Maybe Benford’s Law might help?

And lo!, up pops a piece on a nutty-looking website GNews that makes a case based on the law that the Biden voting tally must be flawed:

However, in the Milwaukee County of Wisconsin, which is in one of the key swing states, Joe Biden’s votes violate Benford’s Law while other candidates’ don’t. (Joe Biden 69.4%, Donald Trump 29.4%, Jo Jorgensen 0.9%. Source: theguardian.com)

What to make of this? Not much! Without knowing a far wider spread of results including those where D Trump votes don’t fit the B-law, the given sample tells us nothing. AND even if in some places the Biden results look suspiciously good, maybe the Biden campaign made a disproportionate effort there and it paid off.

More about the methodology is (for now) on YouTube here:

Anyway, the GNews piece was droll enough to be picked up by Instapundit, so I posted a Tweet about it. 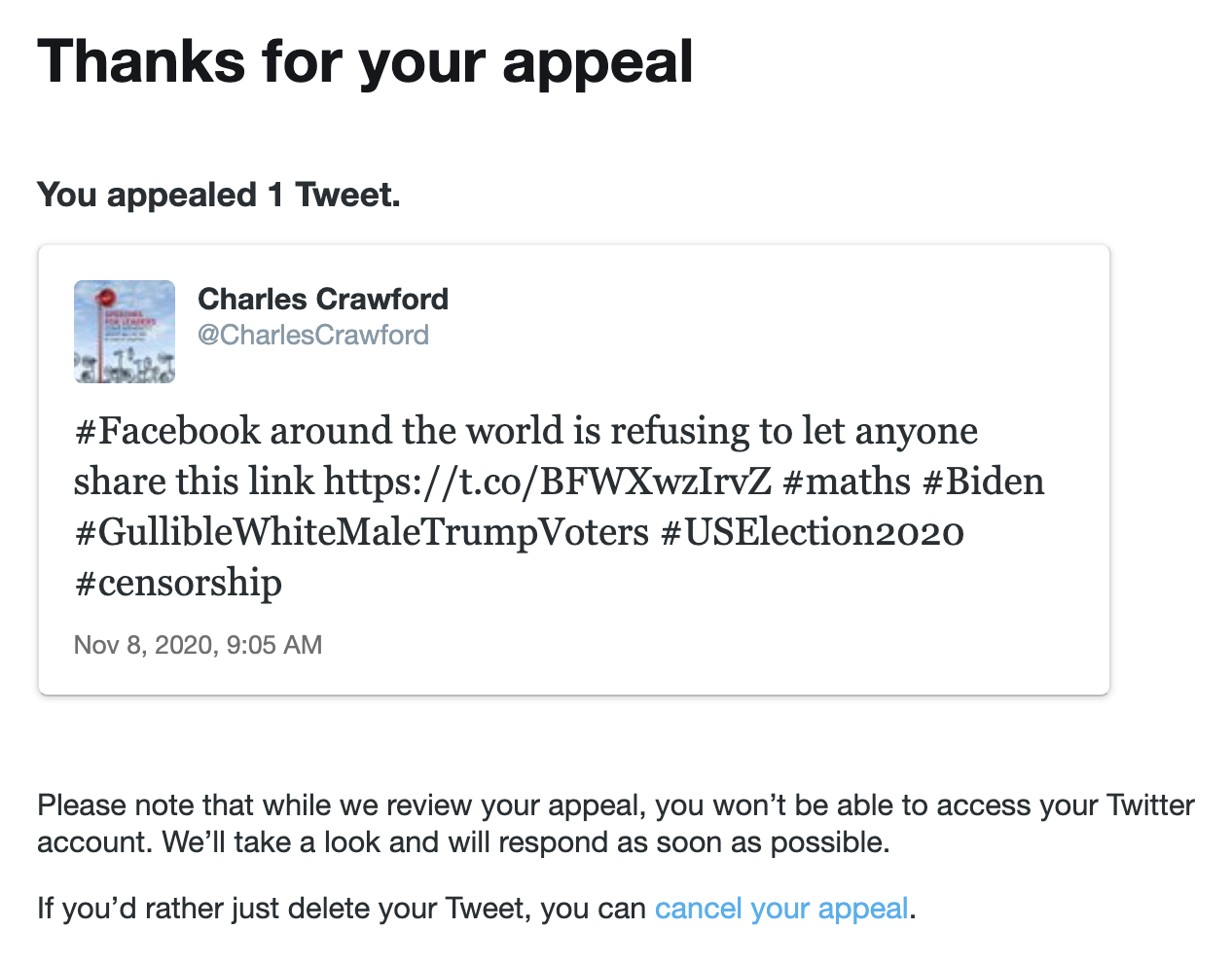 Note the sly Twitter suggestion: just recant, and all will be well.

After some ten days of being blocked and no reply to my various appeals and no explanation of which Twitter ‘guideline’ I had broken, I decided to delete my Tweet and see what happened.

Today I posted the screen shot above and a hint to anyone wanting to check out the GNews site for themselves. 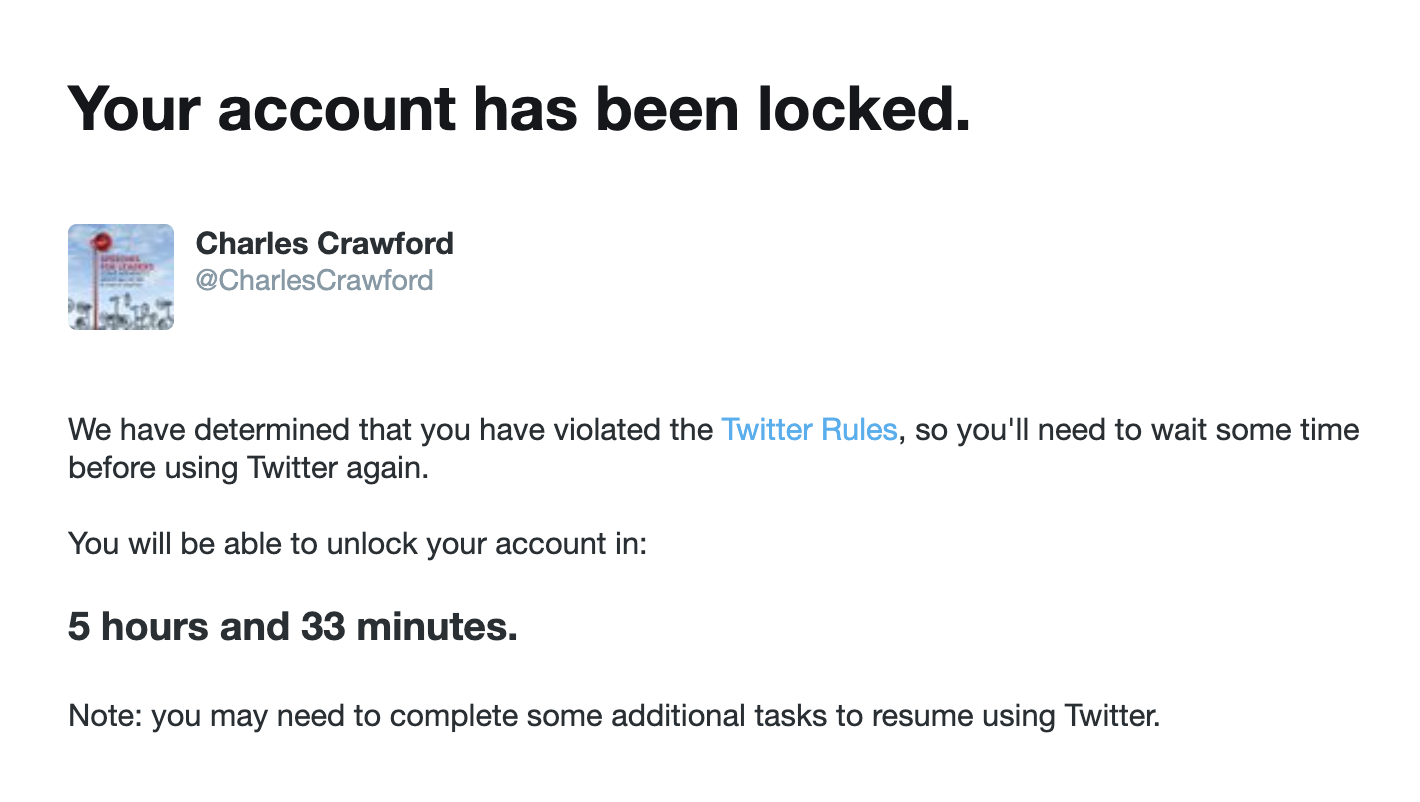 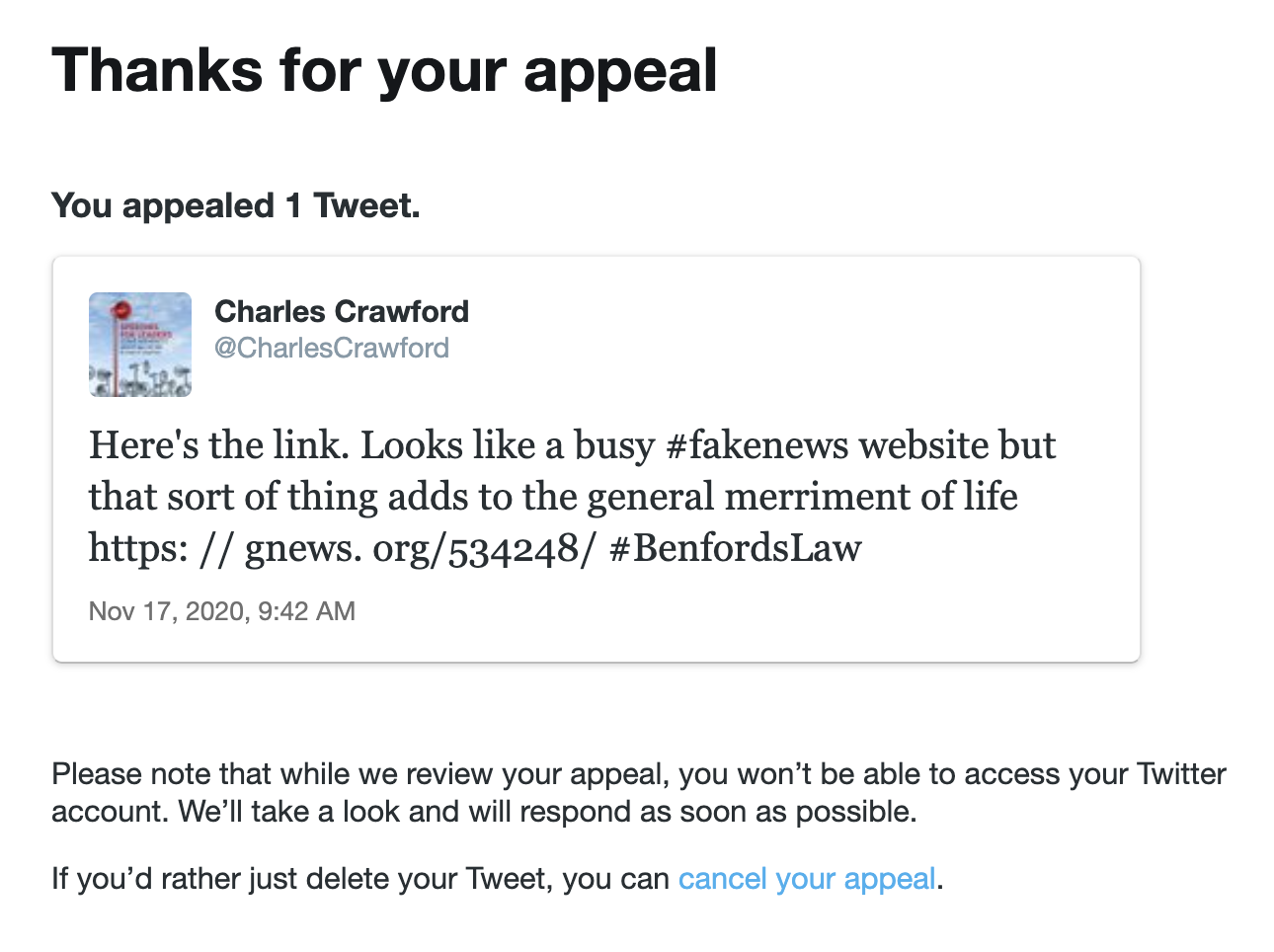 Note that the Tweet has no direct link to the GNews site, as I split it up. But the loathsome Twitter algorithms are alive to such ruses.

To be 200% clear. I don’t care about GNews or about the piece in question. It may well be all lies and disinformation and Chinese/Russian propaganda or anything else. How might one tell?

Still, the argument that there might be statistical evidence that the US elections were seriously flawed is not trivial. In fact it’s damn important. The whole Trump/Russia/collusion soap-opera that dragged on for years was based on that assumption.

The point here is that I and my own coterie of intelligent and sophisticated Twitter followers are capable of making up their own minds about all this. We do not need some spotty creepy bullying SJWs in charge of Twitter algorithms to tell us what we might read or not.

More generally, what happens if the social media giants decide to take sides in politics and start skewing content and links without 99.9999% of people using their sites knowing they’re doing it?

As and when I get reinstated I guess that I’ll have to delete my Twitter account as one first step in cleaning up my life. How in all honour to consent to this untransparent and manipulative garbage?