In Budapest this week I learned that an Estonian diplomat recently asked someone from the inner circle of Putin ideologues where all this latest Russian aggressive posturing and behaviour were going to end. “It ends when you stop us”.

The key features of the current situation come down to these.

The Russian invasion of Ukraine is not an issue of ‘geopolitics’. It’s an issue of geopsychology. Which rules count these days? Who sets them? Who’s ready to enforce them? And thereby on to even deeper attitudes and instincts. Who is strong – and who is weak? Who wants to win? Who is prepared to do what it takes to win?

When Putin looks at the current group of Western leaders and their intelligence agencies vaunting their diverse openness to new pronouns, does he feel that any of them have the nerves and resolve needed for a serious confrontation with Moscow? No. Do any of them want to win, or even now understand what’s at stake? No.

Russia’s underlying negotiation posture is explicitly psychological and based on these key ideas:

Western leaders dimly sense this. Hence their uncertainty on how to respond to the Ukraine invasion. Shutting Russia off from the SWIFT banking system for cross-border payments would be a heavyweight financial sanction, and do real damage to the Russian economy. But what if Russia then launches massive cyber-attacks that (if only for some time) cripple Western banks and health services and other infrastructure? What price are Western governments and voters willing to pay to stand up for their own principles?

Back in 2003 I read an interview with Vladimir Putin in which he was asked what we saw as the core of his policy. His laconic yet profound reply: “To keep what’s ours”.

He of course won’t to say precisely what Russia sees as ‘its’ or to explain what he means by ‘keep’. That would limit Moscow’s freedom of action.

Instead the rest of us are left to ponder the many possibilities of what that ambition covers:

Russia’s illegal annexation of Crimea and now its full-on military assaults across Ukraine show this Putin Doctrine in its most drastic operational form.

The Sheer Cost of Putinism

Since Russia started its aggression against Ukraine a decade ago, the economies of China and the USA have each grown by some five trillion dollars. Russia’s far punier economy has slipped back to where it was in 2008. Had Russia kept growing at a reasonable pace from 2012 onwards it could now be well over two trillion dollars better off. World Bank data: 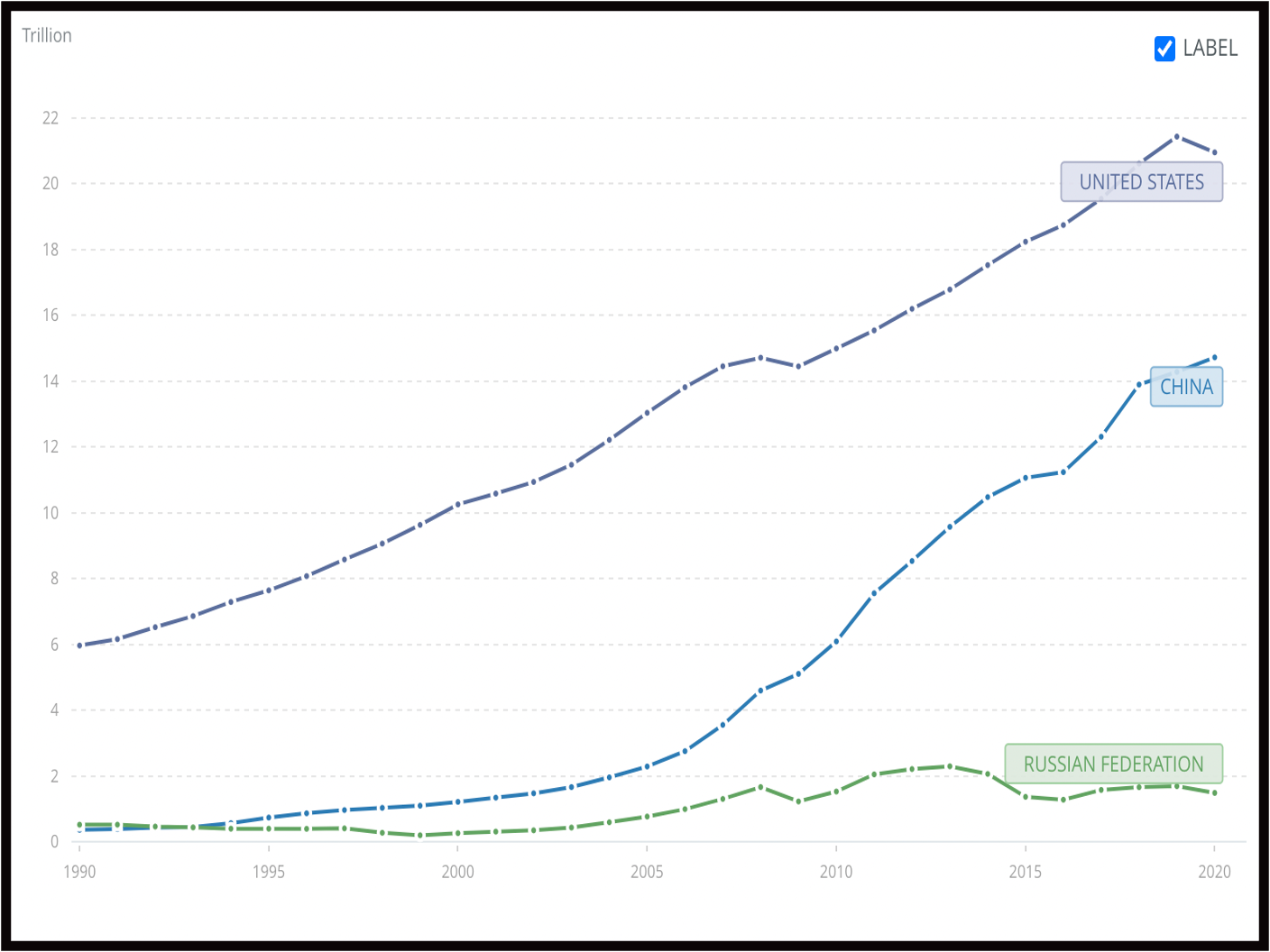 In other words, the opportunity cost to Russia of Putin’s brutish policies is already at a giddy height, and it’s set to grow much faster. But he doesn’t care.

Note too the huge and growing gap between Russia and China. It’s no wonder that Beijing breezily gives Moscow diplomatic cover at the United Nations. From Beijing’s point of view Putin is a classic Leninist ‘useful idiot’ who unsettles the West while making his country weaker.

What does Putin Really Want?

It’s not a stretch to argue that insofar as Putin has any clear end-goal in mind, it’s to restore a sort of Soviet Union 2.0 by bringing Ukraine, Belarus, Kazakhstan and as many other former Soviet republics that he can be bothered to oppress back under explicit Moscow control.

In this scheme Ukraine has a special importance. Maybe the most dangerous threat to the neo-KGB cliques running Russia now is a Ukraine that has a respectable and growing place in modern Europe and operates towards something like reasonable European standards of democratic transparency. That would set a horrible example to the Russian population and to many people in the Russian elite that something else other than lumpen Putin-fascism is not only imaginable but achievable.

So for Moscow under current management smashing Ukraine by brute force makes sense. Both to ‘punish’ Ukraine and Ukrainians for the temerity of wanting to step away from Moscow’s tutelage, and to make clear to other former Soviet republics that they’ll do much better to surrender and rejoin the Russian empire without being smashed.

The wider historic point here is that the last century has seen the end of almost all the nineteenth century European empires. The British, French, Austro-Hungarian, German, Portuguese, Spanish and Ottoman empires have all gone.

But one empire remains: the Tsarist empire. Russia itself is not a country. It’s still an empire, a patchwork quilt of territories and nationalities sprawling across eleven time-zones. Moscow absurdly claims to be defending the rights to self-determination of Russian-speakers in Ukraine (incidentally wrecking their own arguments for not recognising the right of Kosovo’s Albanian majority to leave Serbia). Yet Moscow passes law after repressive law to stop any communities in Russia from pursuing their self-determination.

Any Russian leader now faces a ghastly problem. What to make of the seven decades of Communist rule in the greater sweep of Russian history? Back in 2005 President Putin proclaimed that “the collapse of the Soviet Union was the greatest geopolitical catastrophe of the century”. Most sane people would reply that that greatest catastrophe was the very creation of the Soviet Union – and the ensuing massive communist killings of millions of Soviet citizens needed to keep it staggering on.

This explains why Putin uses the deranged language of the ‘de-Nazification of Ukraine’ to justify his policies. He knows that invading Ukraine and killing countless Ukrainians (and Russians) in the process will not be popular in Russia. He aims to brazen it out by wrapping his aggression in the banner of Soviet junk-populism. This in turn rests on the lie that by the Russian people making huge sacrifices to help defeat Nazi Germany, Soviet communism was shown to be respectable and legitimate.

In the end, when we try to work out why all this is happening, all roads lead to Red Square and Lenin’s Tomb.

Imagine that Hitler had been embalmed and left for public gawping in Berlin. We might have a rather different Germany now.

Not only is Lenin still mouldering in Red Square. Plenty of other Soviet villains up to and including Stalin who helped murder millions of Russians are lying in or by the Kremlin Wall.

So when you see a Russian diplomat smirkingly defending Putin and the onslaught against Ukraine, or when you see a bulky Russian military officer strutting through the rubble of a Ukrainian city, remember that s/he is promoting policies and values that come in a direct ideological and moral line from the communist regime that probably murdered some of that diplomat’s or officer’s own extended family. And that those appalling people have been given Russia’s highest honours.

This level of mental disassociation is not normal. It does not fit into any category of rational analysis that we can identify. No wonder we struggle to work out a coherent response.

Winston Churchill famously described Russia as “a riddle, wrapped in a mystery, inside an enigma.” It turns out that it’s a cognitive dissonance, wrapped in a schizophrenia, inside a death cult.